‘The future of podcasting is adaptive, open and data ethical’ aimed to provide an insight into what podcasting may look like in the near-future, using Object-Based Media. As it turns out, this future is exciting, and may be closer than it seems!

With Mozilla Festival having moved online this year, it would be cruel irony if technical difficulties occurred during an event that is focused on technology. Unfortunately for BBC R&D Senior Producer Ian Forrester, this is exactly what happened during his MozFest workshop - ‘The future of podcasting is adaptive, open and data ethical’. Ian’s desktop stopped responding a few minutes into the session, preventing him from accessing his session slides and notes but he could still be seen and heard by attendees.

Despite this, Ian pushed on with the event, relaying information from memory about the topic of adaptive podcasting. Ian began with an overview of conventional podcasting, where audio is downloaded to a device to then be listened to. However, the only way for podcast creators to understand the numbers of listeners they have is through the number of times the podcast has been downloaded.

Other platforms – such as Spotify – can provide more detailed analytics, such as how far listeners have gotten with podcasts, due to media players being owned and embedded within the respective platforms. Advertisements have also become more prevalent within podcasts, with services such as ACast being used to inject relevant ads into the download, based on location, time and personal data.

Ian then delved into what he described as Object-Based Media – media that is able to adapt to each individual listener based on metadata and different datapoints and sensors from smartphones. If metadata is wrapped around a media item, that then becomes an object, which can then be delivered to a media player that ‘understands’ what to do with the metadata of the object.

Sensors and data such as time of day and GPS can be combined with features like audio layers or binaural audio to create unique experiences for different listeners. Ian emphasised the importance of user control with this project and stated that the sensors and data used would all be local to an individual user’s smartphone, without any data being sent to the BBC.

A current project involving Object-Based Media was also described by Ian: an artist based in Bristol is developing a series of lullabies based on the different cultures that can be found in various areas of the city. Using Object-Based Media, the lullaby would be able to change depending on the location of a listener in Bristol and what culture is most predominant there.

As a podcast app, the project only runs on Android-based smartphones due to the relative ease of developing for Android as compared to iOS. Currently, the BBC R&D team are looking to release the project as a beta app in the next quarter, between spring and summer. Plans are also in place to create an editor suite to allow podcast creators to build and test their audio projects within the app before releasing it to the public, with this scheduled to be completed by late summer.

Ultimately, Ian envisions the Object-Based Media project becoming an open-source one, with creators able to adapt the app to suit their own needs. This would potentially become a reality in the winter of 2021, according to Ian.

To close the session (which turned into a sort of engaging podcast in itself!), Ian played samples of the Object-Based Media from his phone in lieu of providing attendees with the .apk file to engage with themselves, as was the original plan for the session. The audio was reminiscent of the Google Assistant, calling Ian by name as well as playing several layers of audio at the same time in a demonstration of its capabilities.

‘The future of podcasting is adaptive, open and data ethical’ provided an insightful look into what podcasts may begin to look and sound like in the near future and featured a stellar presentation from Ian Forrester given the technical difficulties he encountered during the event!

To see the slides used for the event, click here.

To see the Miro Board used for the event, click here.

To find out more about Object-Based Media, click here.

For more information about Ian and his work, click here. 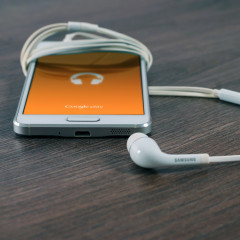 The future of podcasting is adaptive, open and data ethical

‘The future of podcasting is adaptive, open and data ethical’ aimed to provide an insight into what podcasting may look like in the near-future, using Object-Based Media. As it turns out, this future is exciting, and may be closer than it seems!