With an all-female panel of accomplished women working in the field of technology, Mozilla Festival’s event ‘Gender Diversity in Tech and Trustworthy AI’ aimed to highlight the deep-set inequalities that govern the world of tech.

From the organisations WomenInTech and VHTO, panellists Eve Logunova, Esther van Schaik, Sahar Yadegari, Natali Helberger and Dr. Cara Antoine discussed their visions for a future in which women are global leaders in the tech workforce. The role of AI in this progression is vital, as Schaik explained that it makes critical decisions about our lives and when it fails, women are disproportionately affected. Her example of this was that Google’s algorithm isn’t programmed to advertise high-paying jobs to women. The audience also learned from Dr. Antoine that 8 million women are needed in the tech industries by 2030 to close the gender gap.

Even when women do become employed in a tech job, statistics show that they eventually leave their roles. This is due to a variety of factors, but mainly that women don’t feel that they belong in such male dominated environments. This leads to further pressure of any action or mistake that a female employee makes becoming a representative issue rather than an individual one. Such isolation comes down to the smallest of details, as Dr. Antoine explained with her personal anecdote of working for Royal Dutch Shell. She explained to the audience that there was no personal protective equipment made to fit the female employees, and that they had to borrow the mens’ which was uncomfortable and ill-fitting. Consequently, the women banded together and sewed their own PPE. Dr. Antoine pointed out that even seemingly insignificant aspects of a job such as uniform can have psychological effects on work performance, and companies need to ensure that they are making space for women at every level.

These alarming insights into the challenges women in tech face were moderated with some hopeful solutions. These included incorporating inclusive coding education in primary schools and ending stereotypes of tech jobs not being creative. This results in many women being dissuaded at a young age from aspiring to work in these industries, and the lack of representation trickles down through generations, as ‘you can’t be what you can’t see’. Of course, men have a major role to play in this, as they should be putting in the effort to become active allies to their female counterparts.

While this event was informative and productive, there was no mention of the challenges BIPOC and or LGBTQIA+ women face in tech, and when brought up, it was quickly acknowledged but given no in-depth discussion. Most of the panellists were white women, and this was a missed opportunity to unpick the intersectional inequalities of race, sexuality  and gender that is blatantly obvious in the tech industries. 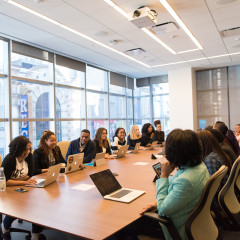 With an all-female panel of accomplished women working in the field of technology, Mozilla Festival’s event ‘Gender Diversity in Tech and Trustworthy AI’ aimed to highlight the deep-set inequalities that govern the world of tech.