The UK education system runs on outdated values that only benefit a portion of students. The curriculum does not reflect real world issues, and we think it’s time for things to change - starting with teaching racial politics in schools.

This article was written by Saskia Calliste and Tayo Adewole

There has been a long-standing argument about the ineffectiveness of the British School Curriculum and how it does not prepare students for real-world life experiences.Additionally, the use of exams to measure a students’ progress and intelligence is both ineffective and tends to exclude students who may not be good test-takers from reaching their full potential.

In our current societal climate, social issues affect those of all ages and schools – public, private and academies – should be teaching their students how to navigate these social issues. Most recently, two schoolgirls launched a campaign called ‘Our School Now’, urging that ‘street harassment’ be taught in PSHE/RSE lessons in schools. The same sentiment needs to be implemented for racial politics.

PSHE lessons have the power to be the window into society as we know it that students desperately need. However, the relationships and health aspect of PSHE have only become compulsory in all schools this year (PSHE Association, 2020). The PSHE Association state that PSHE “aims to develop skills and attributes such as resilience, self-esteem, risk-management, teamworking and critical thinking in the context of three core themes: health and wellbeing, relationships and living in the wider world (including economic wellbeing and aspects of careers education)”.  The vague nature of the curriculum is most likely attributing to the lax enforcement of the subject, which leaves students no more informed on how to navigate life after high school than learning trigonometry does.

Whether it’s a conscious decision students make or not, they tend to get a lot of their information on world issues from social media. Although social media can be a useful tool, the amount of information out there is overwhelming, to say the least, and not always accurate or a true reflection of their particular experiences.

For example, social issues in the US often reach all corners of the world. Young people tend to base their political point of reference on the US model, which, although relevant to some to an extent, does not help them navigate their way through UK politics. This, in turn, keeps them in the dark about the impact the political climate of their own country has on them. If so inclined, schools could help streamline this information, address their concerns and tell them the truth about what the current political climate means for them, and how to survive in a world that still runs on a colonial system that continues to work against them.

The UK’s statistics on stop and search for the ages of 15-19 are astonishing. This age group is targeted with the highest number of stop and search uses, according toStatistica. London specifically has thehighest numbers for stop and search of non-white people. Although trends of this vary throughout the country, stop and search is essentially the product of a systemically racist system that targets non-white people as part of a long-term ploy to keep them as second-class citizens of society. The history of this goes back centuries yet the fact it is glossed over leaves students without the tools and necessary preparedness to deal with this. Teaching racial politics to the ages most in need, if we’re truly honest, is unlikely to be preventative, but it could make a massive difference in the outcome, were it to become a reality for them – which if the numbers are anything to go by, is very likely.

“Every state-funded school must offer a curriculum which is balanced and broadly based* and which: promotes the spiritual, moral, cultural, mental and physical development of pupils at the school and of society: prepares pupils at the school for the opportunities, responsibilities and experiences of later life.”

My question here is, whose experiences?

Having predominantly white teachers ensures that the experiences of other races are not explored with the kind of accuracy they would get from being taught by teachers of different ethnicities, even though they are more likely to have shared experiences or concerns. The absence here sadly extends to other areas of the curriculum. Not only are Black teachers, for example, outnumbered, (in 2018, 85.9% of all teachers in state-funded schools in England were White British), so is the scholastic material made by them. Generations of students have been taught Dickens’s ‘A Christmas Carol’, Steinbeck’s ‘Of Mice and Men’ and Lee’s ‘To Kill A Mockingbird, but where is the literature by Black or other ethnic authors?

This further perpetuates that the experiences these students are learning are ones that they cannot relate, nor are they reflected in, which sets a bad precedent, one that unfortunately is probably the only nod to what society is actually like for them. The absence of people who are of different races in politics, literature and art is really the only true point of reference for what it’s like being a person of colour in British society. Spaces, role models, or politicians who are not white are few and far between, which is a continuation of the current curriculum, whose only real message is you’re not included unless it’s on our terms.

People may assume that racial politics is a more pressing issue in American societies, where they are more vocal about Black people being killed on the streets by the police at an alarmingly triggering rate. But racial politics are needed here in the UK just as much as in the US, and having it go unaddressed by teachers, unacknowledged by the curriculum, and spun incorrectly by prolific Murdoch media, is as damaging as the issue itself.

One big thing here would be breaking down the forms of knowledge we use and hold up in the classroom. In Western thought the written word is prized above all. Books are the primary source of knowledge and often the only trusted one. By contrast, other societies have focused far more on orality and lived experiences that can't necessarily be mass produced and learnt by rote. This isn't to say all books should be burnt or discarded, but instead to say that we should consider lived experience as a vital source of knowledge, rather than leaning so heavily – or exclusively – on the written word.

The widening of knowledge sources fits in with the broader embrace of subjectivity that's integral to the establishment of a decolonial education system. Instead of focusing on there being a singular correct narrative/set of ideas, there's an embrace of the multiplicity of human experience. This would likely mean divesting from (or at least drastically altering) our heavily exam focused system, which even in 'soft' subjects like Drama or English is very restrictive, and instead focusing on holistically developing students. In this process, we would also have to rethink how the school system treats its students. Instead of being seen as burgeoning economic units and proto-workers/proto-capitalists, a decolonised education provides students with a much broader and more complex understanding of the world that surrounds them.

It’s hard to see how this would happen in the near future though. The government has recently released guidelines which seek to restrict what can be discussed in classrooms, especially in relation to topics like gender identity and anti-capitalism. If they’re unwilling to discuss these issues, then it seems unlikely that the meaningful teaching of racial politics, or enactment of the far more fundamental project of decolonisation. This, combined with every major political party having deep rooted issues of racism means that we’re unlikely to see change through mainstream channels anytime soon. Of course there is also the case that given the way that Britain is built on colonialism, there is no way complete decolonial work could even be done within education under the purview of the British state.

However, there are still people doing this sort of work outside of the traditional education system. One of the more promising examples of this is the Free Black University. This was started with a crowdfunder started by academic Melz Ozuwu – who has raised over £120,000 so far. The organisation seeks to take a decolonial approach to education by making publicly available resources, contrasting the prohibitively expensive journals and other information of mainstream academia. Their stated goals are to “Encourage the development of radical, imaginative, and transformative knowledge that can truly change the world” and to “Create a space where the healing and wellbeing of Black folk lies at the heart of the educational experience.”

The education system needs to change if we want it to work for everyone. Undoing centuries of colonialism is by no means an easy feat, but the importance of it exceeds any pushback or disruption that may come from it, and it cannot simply be left up to independent organisations; not only for accessibility issues, but because of the value traditional education holds in our country. For this to work, it cannot just be limited to the topics covered in the curriculum, there has to be a substantive change to how it's taught as well, and by whom.

This article is part of a series that explores how we can reimagine education to be better suited for the 21st Century, and fitting of the society we want to live in. Read more here. 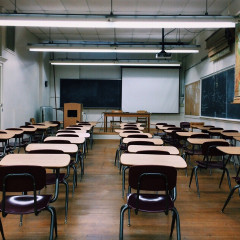 Should we teach racial politics in school?

The UK education system runs on outdated values that only benefit a portion of students. The curriculum does not reflect real world issues, and we think it’s time for things to change - starting with teaching racial politics in schools.