Voice MagBlogsMaya Hawke and the r…

Following the steps of her parents, Uma Thurman and Ethan Hawke, and moved by the artistic environment of her home, Maya began her acting career at Juilliard School, taking part in summer studies at the Royal Academy of Dramatic Art  and the Stella Adler Studio of Acting. Later, she was offered to play the role of Jo March in the BBC adaptation of Little Women.

Like her mother and grandmother, Maya is also a model. She appeared on the cover of a Vogue issue at the very beginning of her career, became the face of the British fashion brand All Saints and participated in a Calvin Klein video campaign directed by Sofia Coppola.

Back in August 2019, Maya released her first two singles: “To love a boy” and “Stay open”, both songs written together with composer Jesse Harris.

Between March and April 2020, Maya announced the release of her debut album, “Blush”, and its first two singles, “By myself” and “Coverage”, along with their music videos (directed by her father). Later, on August 19th, the final single “Generous Heart” and its music video were released, and the album came the next day.

The album -initially set to be released in June but postponed amid the Black Lives Matter protests after Maya said she didn’t feel it was a time for self-promoting, but for education and self-examination-, was well received by the critics, with a positive reception of her songwriting, and getting 4/5 stars from NME.

Blush is a beautiful work, with personal and very emotional lyrics, fresh sounds and an amazing message- I totally recommend giving this wonderful album a listen. 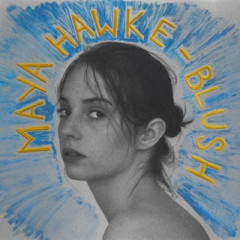 Maya Hawke and the release of 'Blush'