Food is an intrinsic part of any film experience; whether it’s butter-soaked popcorn to stuff in your mouth at the cinema, mouth-watering cooking shows or pizza and movie nights, food and film are soulmates.

Often food is used as a symbol of bigger themes throughout a movie. In Harry Potter, the audience is repeatedly shown food as a source of comfort; a chocolate bar from Remus Lupin, the magnificent feasts in the Great Hall and Molly’s warming family meals. Jordan Peele’s horror masterpiece Get Out, includes the almost psychotic nibbling of a single Froot Loop, followed by a long sip of plain milk through a plastic straw. Unlike the mouth-watering and alluring nature of the food in Harry Potter, watching this on-screen is almost physically uncomfortable and increases the audience’s distance from the antagonist.

Throughout Parasite, food is used as a continuous symbol of violence through the movie and also becomes increasingly relevant to it’s wider social commentary.

From the first few shots of the family folding pizza boxes for minimal wages, and shiny packaged foods balanced across the table, it’s clear that the Kims are barely scraping by, especially when contrasted with their wealthy friend, Min. As the story progresses, and the children of the Kim family manage to cross the line into the world of the rich, food is the symbol that showcases that transition. The Kims’ celebrate by visiting a buffet, and even as their plates are piled high with food, the father encourages them to take more.

Choong-sook soon takes on the job of delivering plates of bright and freshly cut fruit to the two Park children. In the Park’s' house, food continues to serve as a reminder of their higher status, extravagance and indulgence. Their huge fridge in the open-plan house is always fully stocked, despite the family never cooking and is opened by Mrs Park only to sip sparkling water out of glass bottles.

After the Park family’ head out for Da-song’s birthday, the Kims’ can finally indulge in the extravagant world they have entered; they lounge on the usually pristine floors, drinking and eating. But in a last-minute change of plan, the Parks’ start the journey back home, and give Choong-sook a late night order of ram-don. Not even knowing the dish, Choong-sook mixes the pre-packed instant noodles she’s familiar with to create this mixture of ramen and udon. Director Bong Joon-ho said ‘Usually rich people eat expensive, organic food, so they wouldn’t eat something like this… The mom adds sirloin on top of this cheap, instant dish, just to leave the signature of being rich. No one really eats it that way, it was my creation.” In the film, Mrs. Park requests that the noodles be topped with sirloin, elevating the dish to a high class version of a midnight snack. However the specific meat used is called Hanu, which is the Korean name for premium beef, similar to Japanese Wagyu and costs twice as much as beef imported from Australia or the U.S.

But the use of food extends beyond its role of social commentary and symbolism. The use of food also plays directly into the plot. To fully establish themselves within the Park’s lives, the Kims use peach fuzz to remove the existing housekeeper. During a pacy, elegant montage, the audience is shown the calculated culinary attack, culminating in a squeeze of the hot sauce from the pizza company where they used to work.

These subtle uses of food as a marker of wealth, coupled with blood splatters over bread in the bloody conclusion of the movie and the violent kitchen knives, shows Bong Joon-ho’s commitment to detail and how food can effectively be used as a storytelling technique. Parasite shows how food can be turned into a source of horror, and in the movie the food characters eat is representative of both their personalities and status.

Through Bong Joon-ho’s appetising allegories, Parasite takes ‘you are what you eat’ to a whole new level. 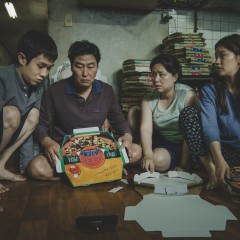