Voice MagBlogs50 years without The…

This year (and this month precisely) marks the 50th anniversary of The Beatles' separation. In occasion to this, I decided to write about their most selling album and the one that –in my opinion- reflects the creative boom of the Liverpool boys.

From their first album “Please please me” (1963) to “Let it Be” (1970), the Beatles reached an incredible level of creativity, reflected on the music, lyrics and production. In a very short period of time their changes were dramatically and contrastable. Those four boys in the cover of “With the Beatles”, aren’t the same four men in the cover of “Sgt. Pepper’s Lonely Hearts Club Band”; by 1967 they had reached a very high popularity, got plenty of n°1 hits in the UK and the rest of the world, and it was during that summer that DJ John Peel broadcasting from the home of the pirate station Radio London (on a ship), referred to the Beatles as “our leaders”.

“Having given up touring after Candlestick Park, we decided we would try to make our next record something special”- Paul McCartney

Returning to Abbey Road in April to record their new album, making new music was a priority, so they decided to step back from radio shows, concerts, TV, and films to become more of a studio band. The sessions began in June, and it was all about exploring new recording techniques like using a Direct Injection box which allowed, for example, to get a cleaner sound by plugging Paul McCartney’s bass to the mixing desk; also, the use of phasing (introduced previously on “Revolver”) that by the use of a delay of 27 milliseconds, gave the impression of hearing two voices. The recording of the complete LP took around 400 hours –that’s a lot of hard work.

"In the morning we'd drive into Abbey Road in John's blacked out Rolls Royce, fall out of the back of the car into the studio."- George

The extravagant Pop Art collage is an example of both the way The Beatles were able to present an innovate idea to the public, and the era of experimentation in the vibrant London scene.

The first sketches were made by Paul based on his first musical idea: The Beatles assuming the identity of Sgt. Pepper’s Lonely Hearts Club Band. With that in mind, the group is shown wearing military band uniforms, in an Edwardian sitting room, holding different instruments. Later, the band would become friends with art dealer Robert Fraser and showed him Paul’s idea.

The figures we see standing behind the band was meant to be “a magical crowd”, but soon became one of the keys to the success of the cover; also, they wanted to make a life-size collage where the Beatles could enter. Paul, John, George, Robert Fraser, Jann Haworth and Peter Blake (artists who collaborated with Fraser in the making of the cover), made a list of the people they wished to see in the cover and photographed with the Beatles, and called them their “lovely audience”.

“In my mind, I was making a piece of art not an album sleeve”- Peter Blake

Jann Haworth hand made the figures, cut them to size and placed them in the set; the stage was surrounded by several objects (including a Shirley Temple doll wearing a Rolling Stones shirt) and a wax figure of the Beatles because, as Blake said, “It made sense that The Beatles would be fans of Sgt. Pepper’s Lonely Hearts Club Band”. Finally, they added the drum skin displayed on the focal point of the image was made by artist Joe Ephgrave, and the flowers.

FACTS ABOUT THE SONGS

"64, Paul wrote in the Cavern we just stuck a few more words on it, like granny on yer knee and Vera Chuck and Dave, this was just one that was quite a hit with us. I think we used to do it when the amps broke down you know just sing it on the piano."- John

"I made a suggestion. I said, 'We need to get away from ourselves - how about if we just become sort of an alter ego band?'"- Paul 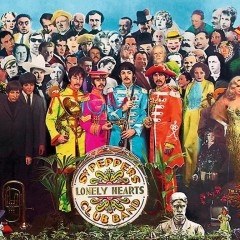 50 years without The Beatles: looking back to the iconic Sgt. Pepper's Club Band

This year (and this month precisely) marks the 50th anniversary of The Beatles' separation. In occasion to this, I decided to write about their most selling album and the one that –in my opinion- reflects the creative boom of the Liverpool boys.