Defining popular culture is an interesting feat. Here's my interpretation and how it helps you achieve Gold.

What a diverse and interesting month? Pop culture is a wonderfully broad topic and TV this last week has been a testament to the range of talent and culture here in Britain. I of course refer to Britain's Got Talent. Whatever you think to the programme, it does provide a platform for a range of talents to be showcased whether it's dance, comedy or magic and much more besides.

What makes pop culture? Well really it takes a lot of groundwork and cementing of ideas before something really becomes part of a 'culture' and it normally takes a number of champions to be developed - advocating a particular idea, style or theme. In some cases such a champion would be a big name individual like Katy Perry, and at other times it is a large collective of people driving forward a notion. Such is the power of influence.

Influence in today's world is a factor widely considered to be key in social media. Your 'circle of influence' may include friends and followers on social networks. Both they can influence you through their posts, and you them. Sharing an idea used to have the most impact when at a gathering of friends, now you can be sat at home and rack up millions of hits by posting a clip to youtube; or simply sharing a status post.

How does this help you're gold award? Well developing your circle of influence is key to attaining feedback and promoting your message. Arts Award has a big and unique component - helping you learn to learn, reflecting on what you've done so that you can move forwards. Sharing a video of you singing, posting a link to your opinion piece on the Voice blog section, or tweeting to the world about the public sharing of your unit 2 leadership project. All these are things that having a good understanding of who is in your network is useful; and ensuring that you keep yourself safe and surrounded by supporters is also vital. Good, maybe even constructive, feedback should be welcomed. It will help you learn and develop, but it should be comfortable for you too.

Developing this culture of a creative and safe online environment around you should be an attainable ambition. And once you've developed your influence, you will develop a notion of what is 'popular' among your network. And at times become the central focus; someone who may be the start to the next big thing, the next embodiment of popular culture.

I 've chosen an image that I found circulating on my Facebook feed recently, something which seems to have gone viral and which attracted tens of thousands of comments, and even graphical responses with people's own versions of the same theme. This notion of sharing a piece of creative genius is something I'm pleased to have as part of my 'popular culture' within my network.

Do remember to check out our recently launched competition - My Word Is Gold - a chance to voice your opinion. 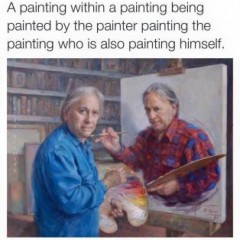 Get Gold with pop culture

Defining popular culture is an interesting feat. Here's my interpretation and how it helps you achieve Gold.