Voice MagBlogsIn defence of the me…

BBC breakfast spoon-fed me images of rocket fire and poverty, I took it without question. Don’t make the same mistake.

As the plane touched down on a dusty runway in Israel, only then did I realise I wasn’t heading into a warzone. Call me a sheltered, middle-class student, but when preparing for a trip to the Middle East last summer, I was oblivious to the fact that this supposed war-torn, taboo-ridden country was, in fact, comparable to the size of Wales.

My appallingly slim knowledge of the country that I had digested from a spoonful of the Today programme every morning had led me to believe that Palestinians and Israelis were in a constant embroilment throughout this vast plain in the Middle East.

How despicably wrong I was.

Shockingly, life goes on in this modern country. Mothers take their children to school, fathers go grocery shopping and tourists relax on the beach. I was embarrassed and humiliated. How patronising I had been. Whilst I had not yet formed my own opinion of the conflict, I presumed the conversation was as tight-lipped here as it is in my own country, where discussions about the Israeli-Palestine debate are best avoided for fear of being called an antisemite or a collaborator. But flashback to the eight-hour plane journey, and I was nattering away to an Israeli man about his stance on the situation, openly and honestly.

Naturally, discussion within the country was widespread and impassioned. Just as Brexit is to the United Kingdom, for someone living in this country not to have an opinion on the subject would be an anomaly.

My complete lack of awareness and respect for the ordinary goings on of this country had been based on my simple digestion of the news I chose to read; BBC breakfast spoon-fed me images of rocket fire and poverty. I took it without question.

If this post-truth era has taught us anything, it is that this is not how to consume news.

14-year-old, lefty liberal me would scream hatred towards mainstream media, ‘It doesn’t represent me!’, ‘It hardly ever reports on war!’, ‘Climate change doesn’t exist according to them!’

But to put it simply, it is not the mainstream media’s job to fill in the complex shading surrounding world events. They report on what is of interest to the most amount of people, and yes, most of the time that means another obnoxious and infuriating tweet from Trump. He is just so easy to hate.

The people we need to blame for spotlighting an outrageous comment from Piers Morgan instead of a thoughtful look at conflict - is ourselves. We give rise to the barrage of stories about millennials spending too much money on avocado on toast because we pour over it. Comment retweeting about Piers Morgan’s disgraceful attitude towards women is a simple and satisfying win. Not many people find it hard to disagree with the man. But he engaged you. He knowingly lured you in with an outdated opinion on race and fired up the masses. This man is a pro at shock tactics.

It is our responsibility as citizens to read widely and think critically about our sources of news, and I don’t just mean beyond your echo chamber. For a real, expert look at an event, you have to look at the more specific publications - and they do exist. There are teams out there who dedicate journalism to uncovering climate change, war, poverty for heaven’s sake the premier league in all the detail they deserve.

If you’re a license fee payer, the BBC World Service would be a fantastic use of your investment. It is an excellent radio station that pools the BBCs vast coverage altogether, delivering headlines from around the globe. If you’re in need of an English speaking channel discussing issues beyond Brexit, this is where you should head.

Unearthed and Trust News are excellent examples of charities using their expertise to communicate to a wider audience. Let me introduce you! Unearthed is the brainchild of climate campaigners GreenPeace, dedicated to in-depth reporting on environmental damage and extremely valuable investigative reports holding climate enemies to account. Likewise, Trust News covers essential topics looking over long term basis; women's rights, climate, trafficking and LGBT+ are just some of the astounding areas they cover. To put their work into perspective, once the news teams leave a site of crisis, Trust News stay and assess the impact for the people on the ground.

While coverage of the Israeli-Palestine conflict will not change any time soon, we have to admit that documenting ordinary life outside of the conflict zone would ultimately be boring. But just as the UK suffers with its identity since leaving the EU, nobody wants to be represented by a single debate.

In defence of the media, you read it, they air it. 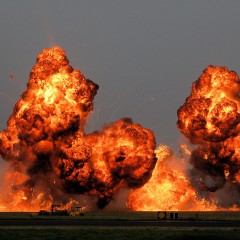 In defence of the media: It’s not the BBC, it’s you

BBC breakfast spoon-fed me images of rocket fire and poverty, I took it without question. Don’t make the same mistake.