This is a piece I have written for my Gold arts award, questioning why anime/manga are not recognised in art schools.

I chose the topic “why is anime/manga not recognised in art schools?” Because at one point I was put into a situation of criticism, due to my young love and influence for anime/manga. This began when I joined an anime/manga club and I wanted to see my arts teachers’ opinion of my work before showing my club members. The teacher’s reaction to my artwork was a smile and simple “nice drawing” but it was done in a way that seem cold to me.

As a child, this made me feel a little discouraged and throughout that experience I learnt not to bring my love of anime/manga art into my artwork as an art student. Because I feel afraid to be judged on personal art I created and love creating. However, I was not the only person who felt this, as artist that inspired me and became inspired by anime/manga voiced their feelings of this issue. Leading me to look into the topic because from my experience, everyone comes across this issue in art schools at one point or another.

Firstly, Manga is the Japanese comic book or graphic novel, where the art creator designs the style of their characters and the scenes their in. Displaying complex or simplified details, using ink.

Whiles Anime is the Japanese film and television animation of sometimes the book or an original story.

Which I believe anime/manga fits in since anime/manga focuses on a lot of creative skills for character design and their background scenes. Where there are wonderful pieces displaying emotional power, like anger or hatred.

But even so, most artist still do not believe anime/manga is art and some comments and opinions I found support this. For example, my research from my survey that targeted teachers and artist:

From my research, I can understand some comments like “I can’t tell one student’s anime from the other.” This maybe because the art students may need more time and a wider range of artist inspiration to help further develop their anime influenced, art styles. Due to this fact it takes a lot of time to really narrow down a special individual style and I believe a student should not be pressured to rush through this process. Kind of similar to expressive landscape or portrait painters. They have a long process before finding a defining art style.

However, others comments like it’s a “copy and illustration not an art in its own right.” Is simply not true since illustration is an art subject in art schools and anime/manga does fall under its subject but that should not define its creative “beauty or emotional power.” If that is what the commenter is implying, then why are artists that create a series of artwork displaying the same design in different ways, not gain the same criticism?

Also, the comment on anime/manga “hold no creative intention or meaning.” Once again, I do not believe to be true, since an anime/manga influenced artist puts a lot of creative intention and meaning. Where many of the times they create a mock-up of their piece and go through a process of developing the artwork feather, until they feel pleased they reach their creative potential.

These kinds of comments are why young anime/manga influenced artists feel discouraged and makes me feather question why it is not recognised in art schools. Is it because art teachers and some artists find the style to be cringe and over dislike it? Since I found this to be the first thought in many art student’s minds.

Or is it due to the anatomy? Since I understand the eyes and head are put out of proportions, as well as the hair being very dramatic and angular. But then again is that not a choice of personal disbody proportion for their art style?

An example of an artist that doesn't follow anatomy proportion is Picasso. His work focuses on cubism art style and he is artwork is known worldwide. Even being mentioned in art schools as a professional artist.

However, this brings me to talk about the possibility of why art schools may discourage anime/manga art. That may be because you are not learning a new style of an artist practitioner. Many schools teach students the fundamentals of art and art practitioners. Which the fundamentals of art and many of those practitioners go ageist the anime/manga influenced students style logic. Because it may clash with the anatomy (like we said earlier) coursing them to become confused, maybe it is due to the medium they use alongside the practitioner uses or that they don't feel that type of art is for them, before they try learning and understand the artist style.

I got tort a lot of art practitioners and with them, I was given a handful of useful art skills to apply to my artwork. Like understanding Wayne Thiebaud's use of halation to outline is food artwork, which he gained this skill from working at Walt Disney's studio.

Or another reason for art schools discouraging anime/manga students is because there's no industry for the style in the UK. Which made me think after watching a video by Charlotte Sketches about by anime discouraged in art schools. Her words wear “there are no passions for the anime in the west.”

Which maybe the big reason why they don't support influenced anime/manga students and try to stir them onto a different path.

In conclusion, I believe anime/manga aren't recognised in art schools because the teachers themselves don't know anything or enough about it. Since it seems to be a straight forward dismissed style and they may see it as a poor fundamental start to understanding art. If only teachers would take the time to understand anime/manga style then they could help support their influenced anime/manga students improve their style feather. As well as make the student understand that before they choose a style like anime/manga, they should grasp the fundamental and use their art practitioners to help build that stronger and more unique anime/manga style. 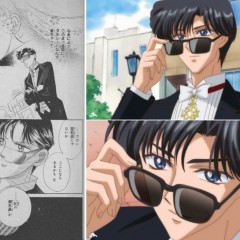 Why Is Anime/Manga Not Recognised In Art Schools?

This is a piece I have written for my Gold arts award, questioning why anime/manga are not recognised in art schools.