When Blue Planet II aired in October 2017, we all knew viewing figures would be high to witness some miraculous journeys through the animal kingdom, and Sir David Attenborough’s enchanting narration. But few could predict the programme’s incredible effect on shaping public opinion towards plastic pollution.

As wet wipes become the next thing in the single use plastics debate, I found myself asking what had triggered the rapid growth in support for environmentalism. Then it clicked - it was the country’s greatest treasure.

Cast your mind back. The new year has begun and Blue Planet II reigns as the most watched programme in the UK of 2017. It has garnered even greater success in China, with the Sunday Times reporting it attracted around 80 million viewers. As the frost settles in early January, Theresa May prepares to visit Xi JinPing, China’s president, to discuss the two countries cooperation over environmental issues. Firmly stating the UK’s position, May plans to deliver a particularly insightful gift - a Blue Planet II box set with a personal message from Sir David Attenborough himself. The boundary really has crossed from personal to political.

Episode one opens with baby dolphins, innovative tusk fish and cute little fledglings, but by the closing episode Attenborough emphasises the importance of preserving the environment we inhabit, whilst our lifestyle threatens its future day by day. Plastic pollution is the particular focus of the final episode of the series, ‘Our Blue Planet’, highlighting the worrying thought that coral reefs may not exist by the end of the century, as they are beginning to dissolve.

The BBC tactfully paints a picture of our natural landscape, enticing audiences with the beauty of our oceans, through comical tales of bizarre animal behaviours to visionary stories of incredible skill in the animal kingdom. Whilst buttering all 14.1 million of us up to squeal at the adorable nature of some creatures and the grotesque yet intriguing nature of others, Blue Planet II reconnects audiences with nature in their front living rooms. The rose-tinted lens is then turned on its head when delivering it’s all important tone of alarm, necessary to overturning our ocean’s fate.

And if anyone can charm public opinion, it is Sir David Attenborough, who recently celebrated his 92nd birthday.

In its first week of broadcast, Blue Planet II’s viewing figures topped the nation’s favourites, Strictly Come Dancing, I’m a Celebrity and the X Factor. Having been sold to 30 countries it is no wonder it has turned a few Tory heads. Secretary of State for Environment, Food and Rural Affairs Michael Gove said he has been “haunted” by the contents of the programme, prompting much debate around the UK’s current attitude towards damaging single use plastics.

Since October, the government has proposed a plastic bottle deposit scheme, which has proved successful in Germany and Norway. The ban of plastic straws and wet wipes is now also at the forefront of debate, as well as a proposal for standardised recycling across the country. These moves are colossal in the progression of legislation, as the law moves at a comparatively prehistoric rate to changing public opinion. In a matter of months, public pressure has finally prompted those in power to act (if they needed any more convincing after the success of the plastic bag law in 2015).

However whilst the BBC is being heralded as the messiah of all things green, it seems that behind the emotive footage, the institution itself is not the icon it promotes on screen. Each year around two million plastic cups are used by visitors and staff across the BBC’s sites. Tony Hall, the BBC director general responded to this saying, “Like millions of people watching Blue Planet II, I was shocked to see the avoidable waste and harm created by single-use plastic. We all need to do our bit to tackle this problem, and I want the BBC to lead the way.” As a result, the BBC have now pledged to end use of single use plastics on their sites by 2020, making everyday swaps in their infrastructure in an effort to cut their waste.

This is a change we can all be making, so if you haven’t been astonished by the endless images of strangled baby turtles or injured birds on your Facebook timeline, it's about time you did some digging.

Blue Planet II not only reinforces that we are living in a golden age of TV, but it also marks a golden age of activism, where television allows campaigners to appeal to a worldwide audience. 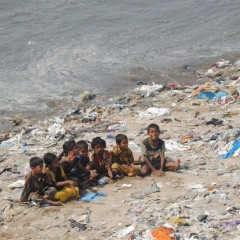 When Blue Planet II aired in October 2017, we all knew viewing figures would be high to witness some miraculous journeys through the animal kingdom, and Sir David Attenborough’s enchanting narration. But few could predict the programme’s incredible effect on shaping public opinion towards plastic pollution.