Want a career in the creative sector?  This annual conference is one of those places that help to make it happen on an industry level.  I reflect briefly on a few key notes I made.

The setting? A great cultural venue I was first introduced to some years back for an Arts Award conference, a place called The Lowry.  It was some time in the making, and we heard from the Artistic Director about it’s journey in the 10+ years since it’s opening.  Back then it was on the edge of Salford Quays.  That’s where the story ends.  But now, it’s right across the river from big ITV Studios and the BBC’s Media City.  And a whole lot more creative industries businesses, premises and the surrounding infrastructure (like hotels) that supports this.  Whilst not exclusive, this is a part of the power of the creative economy.  Redevelopment of an area, regeneration of spirit and the creation of many jobs.

So that’s an uplifting sentiment if you’re considering a creative career - there are jobs out there, there are new buildings being made, and there is a growing creative economy.  Whilst there are challenges we face in the UK today, there is promise.  And Rebecca Long-Bailey MP was there to join us and extolled the benefit of the creative industries to her industrial strategy (as Shadow Minister).  It’s happening.

My first workshop was about influence.  And the takeaway here was that its all about finding the right advocates & leverage.  Bringing more people on to your side, but importantly bringing them in as people who already hold an ear or an in to somewhere.  Who can they introduce you to?  And the leverage - this is not about blackmail.  It’s about what does you proposal do for them?  Is it brownie points with a boss, is it well received by the public, is it simply a great idea that they can jump on board with to help grow.  This seems very commercial or political minded.  It is.  But it’s about developing the right support.  It’s always better to make change from the inside.  (Although external pressure can be a wonderful thing too, they’re just different strategies and external usually needs the power of a greater mass).

My second workshop was about a brokerage project in the North West of England.  About bringing cultural organisations, media organisations, and young people together.  Developing a network of opportunities - but also of support.  They are using Arts Award as a way to accredit the young people participating and I personally believe this is a really strong way to help the participants demonstrate what they’ve achieved.  Hopefully it at least opens the door to the question ‘so what did that entail’ - inviting someone to consider the work opportunity was more than making the coffee.

The afternoon held more keynotes.  We learn that the movement to end-point assessment in new apprenticeship standards is going well.  We learn that organisationally speaking, there are some gaps in how to best implement spending of the apprenticeship levy.  But that new standards are coming on board swiftly and changes have been made so that it happens quicker going forward (including a recent addition which is the Cultural Learning & Participation Officer standard - amazing for anyone who wants to help run youth theatres and similar projects.

But the real finale to everything was ofcourse the Apprenticeship debate.  Now they all answered various questions which basically tells us how good an idea it is to do an apprenticeship and some highs & lows of their journey.  But the point I wanted to share is this.  There was an apprentice in her later 20’s.  There were apprentices who did it after attending University.  There were apprentices who took a more direct route to vocational training.  The mix in just five people is astonishing.  And the sheer range of their apprenticeships (Set construction, live venue managing, community arts etc) & entry paths is uplifting to consider.

Why is it uplifting you ask?  Well it happens to be a great collection of the diversity of appeal and usefulness that apprenticeships can offer.  You might feel an academic route via University is good for you, or you might want to find your feet in work.  It doesn’t mean you can’t change your mind a couple of years later.  You might also think you want to go be an accountant, historian or builder - and then realise; you can apply those skills to a job you can have passion for working in the creative industries!

Everybody’s story is different.  It’s not too late, and it’s never too early to consider your options.  Try what feels right for you, another door will open along your path.

What’s the best advice you would give someone considering what’s best for them in their next step in education or work?  I’d leave to read some of your ideas below. 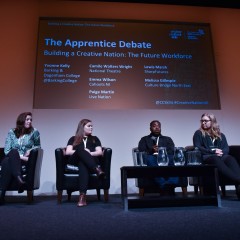 A few comments from the Creative & Cultural Skills Council 2018 Conference

Want a career in the creative sector?  This annual conference is one of those places that help to make it happen on an industry level.  I reflect briefly on a few key notes I made.