Voice MagBlogsWhy do we love award…

Awards season is a time of predictable success, excessive venue budgets and political comradery. So with very little at stake for films that have already proved popular at the box office, why do we give out awards?

It's February; cinemas everywhere are populated with an even higher percentage of blazers and circular glasses. If you look closer you may even witness a lesser-spotted film student. Yes, its award season. With two months worth of bold films, celebrity gossip and a series of near nip slips, we are safely treading water in the middle of the Hollywood madness.

But why do we adore such glamorous events? How can we award art? Why do we all tune in in our masses to watch people raise a golden statue aloft?

Last years controversy surrounding the Oscars lack of diversity has been addressed through a more vibrant array of nominations this time round. BAFTA heralded the diverse casts of Moonlight and Fences, with Lion's Dev Patel and Fences Viola Davis scooping up acting awards.

This solidarity with political causes grants another tick off the award season bingo. Ken Loach delivered a somewhat tired rallying cry for social mobility right off the bat at this years BAFTAs. In one of the night's opening awards he spoke of I, Daniel Blake's message of concern for austerity measures. His statement placed a shadow on the sequins and expenditure exhibited at the Royal Albert Hall on Sunday night.

Another tick on award season bingo is the unexplainable joy of witnessing every superhero, romance star and method actor within one universe, one room, in fact. The Golden Globes is essentially the ultimate fandom crossover. The ultimate filmic collaboration. The ultimate display of impeccable and strangely white teeth the world has ever seen.

But perhaps the idea of an award 'season' contributes to the argument that it is just one big, star studded trophy hunt. By creating awards, we are encouraging a hierarchy in art where there need be none. Art is to be interpreted, surely it's all a relative opinion? So who is to say that a biopic beats a comedy? Who is to say a rugged, bearded actor is more worthy than a former Disney child star?

The Academy's wall of star-stuffed heads is lined with opinion, where box office sales matter little, and critic's choices hold the megaphone.

But amongst the glitzy, predictable terrain stands a community, forged through yawn enforcing speeches and dodgy auto cues. Film buffs and artists alike, we stand together to celebrate an industry rooted in telling stories of humanity. 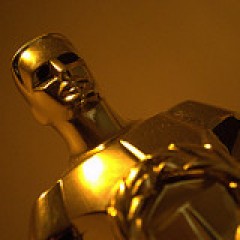 Why do we love award season?

Awards season is a time of predictable success, excessive venue budgets and political comradery. So with very little at stake for films that have already proved popular at the box office, why do we give out awards?