If I had to put my favourite styles of theatre in order, I would probably say that Physical Theatre is one of my least favourites. Not to offend anyone involved with physical theatre, I would just prefer to watch a musical, however, that being said, I have seen two pieces of physical theatre that deserve to be mentioned.

The first experience I had with physical theatre was in my first year of college. We started looking into DV8, a company founded by Lloyd Newson a choreographer from Australia. We watched videos of their performance- Enter Achilles. After watching their videos for weeks, we were told that DV8 were going on tour and that we would be privileged enough to go and watch them in their latest show John.

John was a verbatim piece, inspired by the stories of over 50 men talking about love and sex, portrayed through Physical Theatre. We went into this show knowing that it was for a mature audience but I didn't expect it to be as revealing as it was, both literally as well as emotionally.

DV8 are known for being daring with their art, they have had people shouting and rioting because of some of the taboo subjects they chose to highlight. I was a big fan of how much DV8 had took a risk with some of the scene in the show. I had the pleasure of sitting next to my teacher for the duration of the show, and in one of the scenes, the cast members performed naked. Now, I'm used to seeing people singing on stage for over two hours so to see a group of grown men standing in front of me with their men in front of my face for a few minutes was a bit of a shock, and a tad bit awkward, because like I said, the teacher was right next to me. However thinking about it as an artist, seeing them men standing in front of a sold out audience literally giving all they had to tell the stories of real men was actually quite beautiful and really inspiring.

It has been over three years since I saw my first live physical theatre piece and that scene will always stay with me, not just because of the naked men, but because of what they did to tell the story and make it as real as possible. The stories they told weren't happy little nursery rhymes, they were real and they were raw and personal and hard hitting and they took risks and made art.

The latest physical theatre piece I was able to see was The Curious Incident, and I know I said I wasn't much of a fan of physical theatre but there was no way I was letting this show come to Liverpool without me seeing it. I have known about Frantic Assembly for a while now through college and almost getting to work with them but this was the first piece that I had seen of theirs live.

Curious Incident is my all time favourite book and (yes I'm about to say it, did you really think I would write an article and not mention it) Liverpool Empire is my favourite place so it was only fitting I went to see this show. The story follows Christopher and he writes a book, investigates a crime and reunites with a familiar face.

Physical Theatre is used throughout to help tell the story and keep the audience engaged. This show was one of the most visually pleasing shows I have ever seen, the use of the interactive walls, the props and the physical theatre all worked together to produce a wonderful piece of theatre. Even my mum liked it, and you know how much she loves her musicals!

I really can't see myself going into the Physical Theatre side of it anytime soon, mainly because I'm very unfit and couldn't do that every night. However, if DV8 and Frantic bring another piece to Liverpool in the near future I will definitely be buying my ticket and going along to show my support! 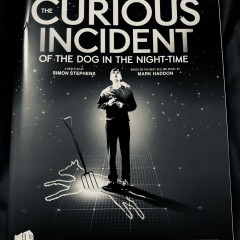 If I had to put my favourite styles of theatre in order, I would probably say that Physical Theatre is one of my least favourites. Not to offend anyone involved with physical theatre, I would just prefer to watch a musical, however, that being said, I have seen two pieces of physical theatre that deserve to be mentioned.