22 May will be remembered eternally in Greater Manchester and further for suffering a crippling loss and dealing with it by being creative and "defiantly kind".

Almost more important than learning the facts surrounding the investigation into the deaths of 22 people was learning the immense stories of unity in the aftermath of the attack. Immediately, taxi drivers like AJ Singh turned off their metres, medics like my sister rushed into hospitals, locals like the selfless Paula Robinson and Steve Jones took to the streets to collect lost people and comfort the injured.

A vigil held the next day at St. Anne's Square was attended by thousands, and the city was gifted a rare, sweltering summer's day. Shops gave out free bottles of water to those still flocking to the city to pay their respects. The city's two world-class football teams put differences aside to donate money. Upwards of £4 million have been donated to the families of those killed and the injured.

Overnight, political party leaders suspended election campaigning out of respect for at least 48 hours. The reaction of the city, county and country has been heartfelt and devoid of hatred. Where voices tried to fan the flames of division and sought to lay blame, Mancs fought back ferociously.

The reaction to news organisations' reportage on the attack was intense. Many channels managed to detract from the severity of the situation by deflecting attention to speculative accusations and hounding victims, and bigotry.

Dan Hett was the brother of Martyn Hett who was killed and had seen some fame after appearing on particularly popular episodes of Tattoo Fixers and Come Dine With Me. Dan announced that he had been harassed by press, including The Telegraph, who found his number and had even visited his house. 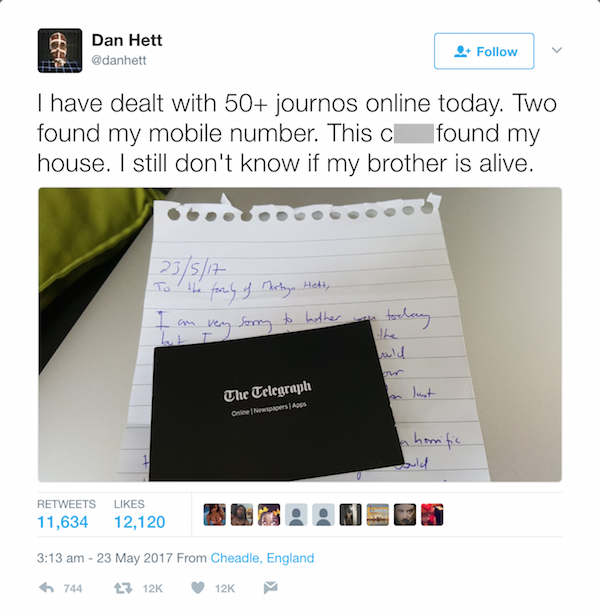 He also lambasted The Sun for running a smear story linking Labour leader, Jeremy Corbyn to the IRA online hours after the attack.

hi @TheSun, you are a fucking disgrace - people are dead, my brother and dozens more are still missing. https://t.co/ZHCA7fTkPv
— Dan Hett (@danhett) May 23, 2017

TV news crews blocked entrances to the Royal Manchester Infirmary and the Royal Manchester Children's Hospital, the two closest hospitals. Within hours of the attacks, there were false reports in the Daily Express that a gunman had opened an attack in the Royal Oldham Hospital – where I was born.

Where intelligence about the investigation was shared with America, Canada, Australia, and New Zealand's intelligence agencies, US intelligence repeatedly allowed leaks to be made to US media that were essentially confidential. This was much to the consternation of Home Secretary, Amber Rudd, who ceased sharing information about the incident with the US until around 21:00 on 25 May.

Perhaps most vexingly, people took this opportunity to essentially place responsibility on Muslims. Adil Ray was accused of "spouting PC platitudes" when he rebutted against the suggestion that Muslims have a responsibility to condemn the terrorists that acted on behalf of "Da'esh", as if condemnation that comes from Islam has more of an effect than from anyone else.

When the rare time you talk of Muslims on your show is to ask them something they genuinely can't do, they'll retreat. You lose them. https://t.co/bVGmr9K7uN
— Adil Ray OBE (@adilray) May 23, 2017

I don't consider this situation to be a case of political correctness. It is plain and simple racism to rebuke all Muslims as terrorists. It is irresponsible to blame it on a tiptoeing, hyper-sensitive, snowflake generation. To say that 'moderate Muslims' need to condemn the attack is to say their beliefs are akin to the warped version of Islam under whose guise these attacks are justified. They kill in order to dictate their way of life on the world. This is not the Islamic way. They kill in the name of the hubris of small men, not God.

It is dangerous and fractious to engender vile stereotypes and tarnish an entire community with this shade of conceit and hatefulness. We shouldn't ask Muslims to condemn the actions of groups like Da'esh just as we wouldn't ask everyone in the UK or elsewhere to condemn the Governments whose interventions in the Middle East gave rise to these groups. It is also deeply hypocritical as many like Metropolitan Mayor of Greater Manchester, Andy Burnham are quick to point out:

Most importantly, not that they need to, but Muslims have condemned the terrorist organisation that commits murder in the name of a warped version of their peaceful ideology for years.

Many have agreed. Mancs and even victims of the attack have stood in solidarity with Muslims – pointing out that those who helped out on the night of 22 May were the real Muslims.

What struck me in addition to the scale of rallying together this week was the essential creativity of it. Street art, illustration, poetry, comedy, tattoo art, banners and protest art, and, of course, music were used to react to the attack and express solidarity, defiance, and grief. The bee has been a common theme throughout. The insect, as an emblem, harkens back to the city and the region's role at the forefront of the industrial revolution. The industrious insect came to be compared to our workers.

Manchester champions high quality street art and on The Outhouse in Stevenson Square, where a mural to David Bowie was painted shortly after his death, a bee was painted and more recently a mural with the city skyline. An illustration from Dick Vincent captioned with "Stay strong, our kid" went viral the morning after. 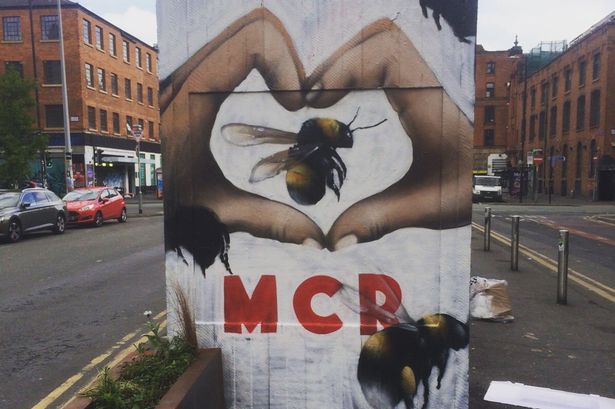 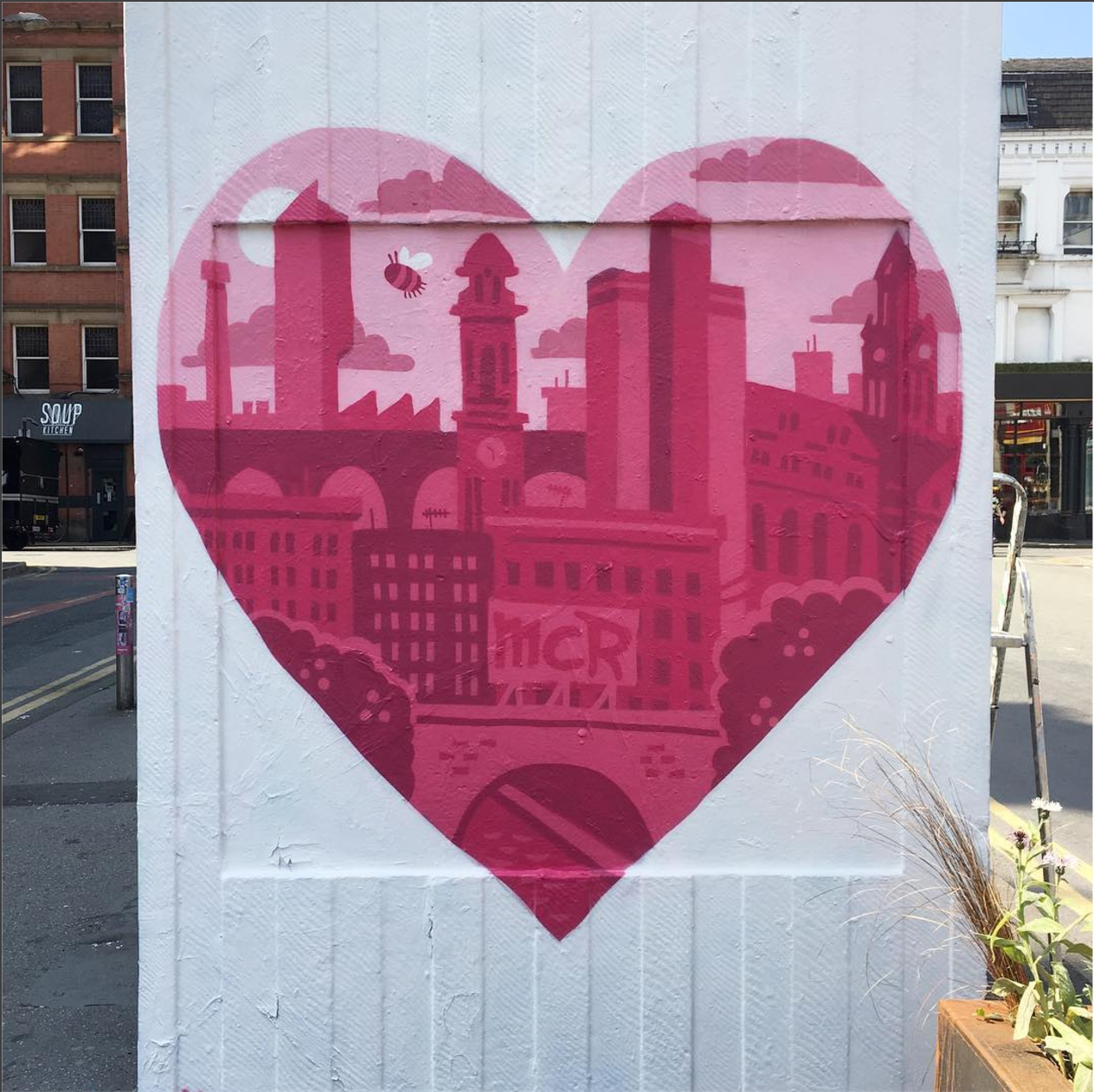 On Twitter, in reaction to the terror threat level being raised to the highest level of critical, decided by the emergency meeting of the Cobra committee, people turned the hashtag #BritishThreatLevels on its head. Instead, we decided to tweet funny fears that Brits experience.

Back onto the bees, tattoo artists offered tattoos of bees for £50 with all the income donated to the victims. At vigils and tributes throughout the world, moving placards and banners were created. Characteristically of Manchester, a city renowned for its historical rock music prowess, music featured heavily in the week. In Piccadilly Gardens, a busker attempted to lift the mood with a quick "All You Need Is Love" from The Beatles.

Immediately after the 11am one-minute silence on 25 May, the crowd in St. Anne's Square broke out – completely spontaneously – into homegrown duo, Oasis' "Don't Look Back In Anger".

In addition, Ariana Grande expressed her grief and the world's biggest concert arena performers did the same.

I awoke on 23 May and was stuck in bed watching Dan Walker's excellent special on BBC Breakfast for hours. I felt a way that I haven't for years – perhaps not since Fukushima or even 7/7. This had happened almost on my doorstep. In a city I have adored and yearned to be in. I am from Oldham, six or seven miles away from the city. Because of this, I was unsure whether I should react too passionately. I shouldn't react as if I'm from Manchester in case people came back to me saying 'this isn't your tragedy'. I wasn't sure if I should cry so I didn't. I didn't know if I should change my profile pictures on social media so I didn't. I didn't know if I should 'check myself safe', being as far away as I was, so I didn't.

The cloudiness subsided when the care came along. People around the country, around the world and someone I've never even spoken to face to face asked me how I was. They were so much further away, but felt such concern that they needed to get back in touch with me. After I did check myself safe I began to take it all a bit less robotically. In my daftness, I forgot to take this as a humongous loss to humanity and a vigorous affront to decency.

I wouldn't say it's best not to act angrily, but anger can lead to volatility and this was largely excluded. I allowed myself to be angry, scared, deeply upset, but uniquely patriotic. In the face of such danger to our way of life, a city came together and responded in a creative way; a way to marvel at. While we fight against those who caused this, we must continue to sympathise. Don't become desensitised and be as nice as you can be to each other. 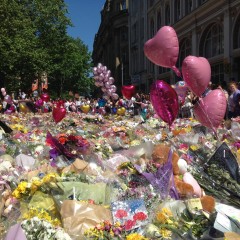 Manchester handled its loss with kindness and creativity

22 May will be remembered eternally in Greater Manchester and further for suffering a crippling loss and dealing with it by being creative and "defiantly kind".