Voice Reporter Ellen Orange, who is about to finish a Literature masters at Durham University, discusses the path she's taken so far.

As a child I was very creative, but because I was good at 'proper' academic subjects, the arts were never something that I was encouraged to pursue. I loved to draw, paint and use chalks but because I never really focused or developed my skills. By the time I was a teenager I had moved into more 'crafty' mediums like jewellery-making and photography. However, because my school had pushed me away from art and down an academic route, I couldn't even take Photography at A-Level and had to be satisfied with night-classes. Thankfully, however, my love for books and reading led me to English Literature, which was considered a valid option.

Alongside the drawing and photography, I had always written: poems, stories, even plays. At Sixth form I was excited that part of my English Language course included some creative writing and I was able to try out different styles and imitate works which I felt inspired by. I wrote a newspaper column and a short fairy-tale and I enjoyed this so much. As much effort went into the design as writing and as finished pieces they looked great. This was the first time as a young adult that I had written anything to be seen publicly – and to be taken seriously!

However, when I got to Uni I was a bit disappointed – I had signed onto a great English Studies course with some hope that there would be Language and Creative Writing modules available but there wasn't. In my first year I became busy setting up a society for Photography in my college and it wasn't until my second year that I plucked up the courage to start writing for the student newspaper. A few opinion pieces and reviews later and I was suddenly a Deputy Editor of the Comment section. This was so much fun as I loved to design the page and facilitate content just as much as I loved to write!

Soon my friend and I signed up to be editors of our college yearbook – another project which combined writing and design which was so much fun. A year later I was able to get a four-week internship with Living North – a regional lifestyle magazine, just by emailing them my CV with this experience. Working on the editorial team I was content writing in loads of different styles to what I was used to: advertorials (definitely my favourite!), features, guides and even my first interview. This experience was invaluable and led to me getting another copywriting internship for Siemens, which taught me that the kind of jobs I wanted could exist in any company, not just a magazine.

After graduating I was lucky enough to be offered a Masters scholarship, and so have continued on to my second English degree because I really believe that this will help both my career and my writing. I have been doing more fictional writing through the creative writing society, and have started to extend my art forms, having been involved in directing and producing two plays. Alongside all of this, I have become an Arts Award Voice reporter this year which has really helped me branch out and do different kinds of writing to what I am used to.

I am proud to say that I have also just started a job as a Marketing Assistant which involves a lot of events organisation, copywriting and advertising. In the future I would love to take on this kind of role within the arts sector, perhaps for drama or festivals. However, the most important thing I have learnt is that arts skills are not exclusively for the arts sector. They are really important in all kinds of jobs, however, experience is key and it is never too late to get involved and sign up for something! 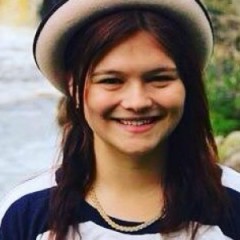 My creative past: Ellen Orange

Voice Reporter Ellen Orange, who is about to finish a Literature masters at Durham University, discusses the path she's taken so far.