Voice MagBlogsMy creative past: As…

As some of you may know, I love to act. I've been acting since I was about 9, but I only realised I could actually do it as a job when I was about 13. From that moment on I did everything I could to make it a reality. At the moment I'm in my last year of college. I've spent the last two years doing a BTEC in acting. When I was picking what I wanted to do after school and where I wanted to study I was always sort of embarrassed to tell people I wanted to be an actor. I couldn't handle the disapproving looks of my teachers and the other students who were going to do A levels at big fancy colleges.

When I started acting in college it was the first time I'd ever done any training. I mean, I'd done Youth Theatre for about 3 years before I went to college so I knew how to act and how to do the basics, but I'd never spent more than one day a week doing it. It was a bit of change doing it as a subject that I was going to get a grade for at the end, especially since it wasn't an option for me to do Drama/Acting at GCSE level. Everyone who I was meeting in college had experience in different things that we were then doing in more detail and I was basically starting from scratch, which at first made me feel stupid, but as we went on I realised that just because they'd done it before, doesn't mean they're better at it than me. I made sure I put 100% into the work I did, both theory and practical work and ended up coming out of my first year with a grade DD. As I'm approaching my final few weeks my target grade is DDM, which I've already exceeded and could possibly get DDD*. Which I think shows that even if you haven't had the chance to do something at GCSE, or have no experience at all, if you love it and put the work in you can come out with good grades and succeed in it.

Even though I'm getting that training in college, I still do things for myself and try to give me that lead over my competition. I have an acting agent who sends me off for different auditions, and I learn new things every time I go. I'm always looking for work online, open auditions and student films to help me extend my knowledge further and learn things I don't in college. I've also worked quite a lot on Hollyoaks recently and to be working on the set of a TV show most people in the UK know about is quite fun and exciting. It's also a really good way to learn professional skills and the best ways to act in that environment.

Acting isn't easy as a career. If something's not happening, if you're not getting the jobs you want, don't give up. Keep looking online, get an agent, do some student films for free and get your face out there. Networking is a big thing, join Facebook groups or your local youth theatre, the more people in the industry you meet the better your chances of getting a job will be.

Since I'm finishing college this year I want to make sure I keep learning and hopefully get a job in TV and Film as soon as I can, so this Summer I applied and have been accepted onto the National Youth Film Academy's beginners course where I'll be working on a film in Watford for 10 days. This is a good opportunity to network and learn new skills. I found this course by accident. It's always good to do some research and see if there're any courses like this that interest you, it's a good way of building confidence as well, going somewhere new, where you'll have to start fresh, meet new people and instantly connect with them to make a film! 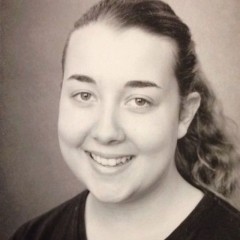 My creative past: Ashlee Brown