My name is Jo, I'm 18 (although by the time this goes live I'll be 19!) and I'm currently studying Technical Theatre and Stage Management at RADA. I came from a very academic school where creative subjects were seen as an 'extra', or as an 'easy option' taken to pass the time. Despite that, I got some great work experience and I have been doing shows bi-annually with an amazing amateur dramatics group for the last 3 years or so. Arts Award also played a major part in helping me work out what I wanted to do with my life. I hope to one day get a job working on a West End show, and would eventually like to work on Broadway or in Hollywood. They're big dreams, I'm aware, but if I don't dream big, no one else will do it for me.

I first realised I wanted to work in theatre when I was about 15. My mum had just taken me to see Matilda and I fell completely and utterly in love. I started looking into ways I could gain some understanding of backstage theatre jobs, because at the time I knew next to nothing. My mum bumped into some people painting set for an amateur dramatics production, and took me to meet the chairman of the company. He took me in straight away and had me painting set and crewing a production within days of meeting him. The company are amazing, as they have absolutely no bias against age, and were willing to let me try out any job I wanted. In my opinion, the best experience is that where you can be in the environment you want to work in, experiencing the job firsthand.

Another defining moment for me was when I was accepted onto the RSC's Taste of Theatre Work Experience. I spent a week at the RSC in Stratford, learning about all the different roles in Technical Theatre, and, because everything always connects somehow, this was where I was introduced to Arts Award - I completed my Bronze Award that week. This course really helped me get a grip on exactly what kind of jobs I would enjoy doing, and encouraged me to look further into them as careers.

I think the most important thing when you find something you love, and you know you want to spend the rest of your life doing it, is to stick to your guns. There isn't anything much harder than having your careers advisor tell you that you don't want to go into that career. As sad as it may be not to have that support, be your own support. Do the research and find out anything you can about as many places as you can. For me, the best place ever was TheatreCraft. I found out so much and gathered so many Drama School prospectus', my arm was hurting by the time we left. And, I found the Arts Award stand and explained that I wanted to do a higher level but didn't know how, and about a year later I had completed my Gold Award.

Sometimes you just have to be proactive and do the work necessary to get the information you need. Nothing in life will ever be simple and everyone has a difficulty to face. When it came to this, my difficulty was the lack of support I had from my school. But honestly? I don't think I'd be where I am today if I had taken their advice or hadn't done the work and research I did, and I wouldn't be as happy for it. I know a lot of people don't believe in fate, but I know that for some reason, I was supposed to be here today, studying at drama school, working on the Youth Network and writing pieces like this, hopefully helping others in a similar position to the one I faced and proving that you can win. And by the way, it's totally worth the fight. 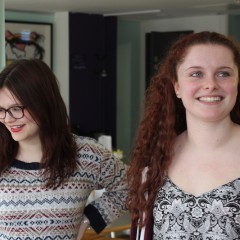 My creative past: Jo Nead