Voice MagBlogsMinecraft as an art

The following is a repost of an article I first wrote in 2013.

I remember quite vividly, while sitting in the 6th form common room, mocking one of my closest friends for playing Minecraft. To all intents and purposes he was as geeky as me, but I couldn't help to feel like looking down on him for deriving entertainment from flying around, destroying and replacing dirt blocks. It seemed totally pointless to me, when games like Halo, and the coveted Batman: Arkham City were at home and crying for my attention.

But a year later, I find myself sitting down, ploughing money, time and effort into the very thing I mocked. I'm completely obsessed with it. I watch people livestreaming their game for hours on end, I now follow and subscribe to channels that are dedicated to Minecraft, and I have even considered buying texture packs to enhance its visual appeal.

Ignoring how silly I feel for doing a complete 180 on my opinions of minecraft, I'd like to talk about an article I found on the BBC. It is discussing how perhaps Minecraft is in fact more than a game. It was something I had previously given some thought to, but not in any serious way. The article helped to coherently order my thoughts, and I now know exactly how I feel about this block orientated game.

I think the creators are artists. This in itself is not revolutionary as I have stated before that all video games are artwork, sculptured and created by artists. But Minecraft is different. Minecraft is art that inspires and enables art. It is a sandbox world, that you are free to do whatever you like, within the realms of the very flexible rules. You can control the weather, the land, the vegetation, the animal population. You are able to live in a simple dirt hut, or create whole palaces and true works of wonder. It is an exceptionally liberating experience. You get out what you put in. Of course you are not creating anything physical, but the pride I felt upon completing my cliffside penthouse, rooftop garden and swimming pool is definitely tangible. It serves as a bonding game with my girlfriend and my brother as well.

The article discusses how Minecraft is being used as an educational tool in schools.

Obviously it is not teaching a ton of real life mechanics, blocks of wood do not just suspend in the air, and a bit of coal on a stick will not suddenly become a never exhausting source of light. However, the game does require a great deal of logic and a degree of mathematics if you are doing construction tasks. There is also a mineral called redstone, and this serves as electricity. Once you start to play with redstone you can create insanely impressive mechanics. Pistons, light switches, trap doors, butchering houses, automated farms. The world is limited only by your technical ability. There is a large amount of mechanical knowledge required to achieve these feats, and so far I'm failing.

The elements of common sense, rational thinking and careful planning are all life skills I think are not taught enough in school, and while I would never be as rash as to declare Minecraft the cure all solution, I think there is potential for it to aid the development of children.

The artistic side of things is further opened up when you learn how to create texture packs for the 'game'. A texture pack, which could be thought of as a 'theme', can completely change the look and feel of Minecraft, and can make a quite pixilated environment seem beautifully high definition. DIfferent artists create different textures, and each one can fundamentally change how you experience the game. If you have the knowledge you can alter the whole of Minecraft to suit your own personal tastes, and then truly create a world for you to get lost in. Is that not what art is all about?

There is the consideration though that if you are interesting enough, and have the time, you could possibly make your fortune on Youtube as a games commentator. Tom Cassell (The Syndicate Project) now resides in both Manchester and L.A. making a living from Youtube, allowing him to expand into clothing lines and convention appearances. I very much doubt I will ever get to a level where I am making thousands off of Youtube, but equally that isn't why I play. It allows me to escape, messing around constructing glass empires, and exploring sand temples. I play it just for the fun of creating, and it serves as a distraction from the mountains of work waiting to be done.

However, maybe I am reading too much into it? I got equally excited about the possibilities of Farmville, going as far as giving my girlfriend the password to harvest my raspberries. However, I feel that this is something more. For one thing, it isn't a data mining spam fest, and Farmville offered nowhere near the same level of freedom and customization. It is truly a place where you can let your creative side run wild. 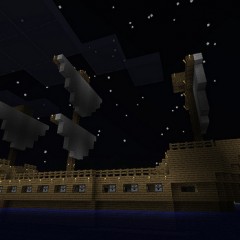 Minecraft as an art