Wii Fit was a game aimed at encouraging exercise at home, while also making it fun for the whole family. There was a wide variety of mini-games to choose from including aerobics, yoga, strength training, and balance tests. Many of the games involved the use of a Wii balance board; this board was a unique platform peripheral that players, one at a time, stand on while they play certain games. It typically was used for centre of balance games and also helped to weigh users in the same sort of style as bathroom scales.

There were over 40 activities, many of which aimed to improve posture and maintain the centre of balance. Players could also track their records on the mini-games, progress, and set goals by creating a profile where they enter their name, height, estimated weight, birthday, and a Mii character to represent them in the game.

Just dance was a motion-sensor-based dance video game, with both single and multiplayer modes. In total, there were 11 Just Dance games available to play on the Wii, with an additional 2 to download on Xbox later. Each game consisted of popular songs, and each song came with a unique set of choreographed moves for players to copy while holding their Wii remotes, and they received points for their accuracy. Additionally, players were given a few gold moves to achieve by striking a particular pose for bonus points.

Mario Kart was (and indeed, still is) a single or multiplayer game that includes characters from all across the Mario universe, that compete on over 30 different race tracks. Players can use special items from the item boxes across the course to help climb the leaderboard or to retain their winning position. Items available include lightning, ‘bullet bill’ and super star, green and red shells, bananas, and mushrooms. Players can choose from bikes or karts, which you can unlock more of, as well as courses and characters as you achieve in the game. There was also a Mario Kart Channel on the Wii home screen that displayed regional and global rankings for time trials on the game. Additionally, it also hosted special tournaments for users across the world twice a month on modified courses.

Wii Sports was the first ever game to be played on the Nintendo Wii console. It was a simple, yet highly entertaining game for all ages to enjoy. It consisted of 5 sports simulations, originally designed to demonstrate the capabilities of the motion-sensing technology Nintendo had put into the Wii remotes. The 5 sports were golf, tennis, baseball, boxing, and bowling. Players used the Wii remote to mimic actions that you may do while playing the sport in real life, such as swinging a golf club; they even added the use of a nunchuck for the boxing game to make it more realistic.

New Super Mario Bros was a single and multiplayer game from the Super Mario Bros franchise. The aim of the game was to save Princess Peach from Bowser and bring her back to safety. Players must try to complete various levels which contain boosters and obstacles along the way. Players must get to the flagpole at the end of each level in order to complete it and eventually fight ‘big bosses’ to get to the next world. Characters jump, run, wall kick, ground pound, double jump, and triple jump to help them on their journey. It uses motion control features to allow players to perform additional special moves such as short spin jump to kill enemies, mid-air twirl to elongate air time, and the ability to throw, pick up and carry items. 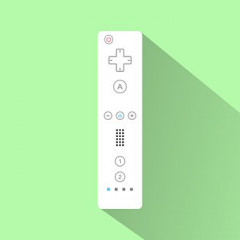