Retrospects this week will take a look at the cult classic film just as relevant today as it was in 1999 – East Is East.

Racism is something which has been weighing heavily on my mind recently after writing my series ‘Racism In The UK’, which if you haven’t already I would absolutely love for you to check out on Voice.

I figured what better way to cap off the series than take a look back at one of my absolute favourite films, ‘East Is East’.

Now, this article will not necessarily be a review of things such as the cinematography or the soundtrack. The truth is that people watch this for the story and for the themes of identity, assimilation and racism. Retrospects this week will therefore look back at the plot and the themes that are explored in the film.

East Is East follows George Khan’s Pakistani-British family and their lives in 1971 Salford, England. George is a very religious, orthodox and strict father to his children and also to his English second-wife. Yet, being British born and bred there is something of a culture clash between the family and George. The film explores identity, assimilation and race in a story that’s no doubt familiar to many South-Asians, through a blend of humour and drama that made the film somewhat of a cult classic due to its relatability.

The most pertinent theme in the film for me is its exploration of identity through the vector of the children. As a British-Asian, this is something myself and virtually everybody I know can relate to in some capacity – a feeling of constantly trying to spin the two plates of being both British and Asian as a ‘British-Asian’. The children in the film encapsulate this sentiment perfectly through their private and their public lives. Nazir, Abdul, Tariq, Maneer, Saleem, Sajid and Meenah are a collective embodiment of this dissonance, whilst they all may reluctantly pray five times a day they also go clubbing or engage in casual relations. That said, this is not necessarily the sort of story which is relatable only to those who are South-Asian. This experience can no doubt be extrapolated to ethnic minority groups of any kind who live in the UK, who have to calculate how to best preserve their heritage(s) while assimilating to the culture of Britain. East Is East begs the question of exactly what it means to be an ethnic minority in this country.

A large part of being an ethnic minority in a foreign country is navigating the inevitable clash of cultures. The Khans all find themselves caught in the middle of a proverbial tug-of-war, every single one of them. The children perhaps more obviously so given the flagrant rejection of cultural practices outside home, where their casual flings are juxtaposed with their father’s desire of an arranged marriage for his sons. Yet, even the father has the iconic retort when being offered a cup of tea that he’ll only have half a cup; which is perhaps symbolic of him only being willing to assimilate halfway into the culture of Britain. Whilst he may have married a white woman and runs a popular fish and chip shop with his family, George wants to instil in his children his pride in his heritage, and of being Pakistani.

East Is East is set just a few years after the infamous speech by Enoch Powell – ‘Rivers Of Blood’. Powell’s speech provides the racist, xenophobic and hostile environment that would’ve been faced by ethnic minorities at the time and unfortuantely is still having to be endured by many of us even today. The Khans in this sense are the everyman family, and are representative of all ethnic minority groups having to face battles – not just internally but externally, where the place they have emigrated to is hostile. For all the iconic one-liners like ‘bastar’ or ‘half a cup’ the film does have much more serious undertones, racism, domestic violence and homophobia to name but three.

East Is East is just as relevant today as it was when it originally came out all the way back in 1999. That is perhaps a damning statement to make, but it is also exactly why you should take time to watch it; East Is East is funny, entertaining but it certainly does not shy away from some very important themes. 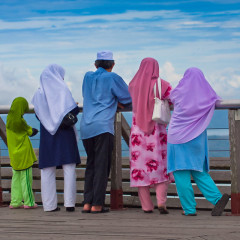 Retrospects this week will take a look at the cult classic film just as relevant today as it was in 1999 – East Is East.