Voice reviews every episode from the final series of Peaky Blinders

After learning of his diagnosis Tommy decides to bring his newfound son Duke into the family. This is unsurprising considering in a previous review I mentioned how Tommy’s character is built on being a family man, and that it would only be a matter of time until Duke was introduced to the Shelby clan.

Despite all the hype surrounding the final series of Peaky Blinders, in my opinion it's continually fallen short, and episode 5 is no different. There's no real direction, and many of the characters such as Diana Mitford are starting to grate. As the series goes on I’m more frequently wondering just when each episode will end. so knowing there's an extended episode 6 really hasn't got me excited. Despite Cillian Murphy's acting – particularly in the scene where he's in the dining room with Oswald Mosely and co – I'm not sure anything can save this series now.

Episode 5 also saw Linda (Arthur's ex-wife) for a brief moment after Tommy asked her to help Arthur, who has gone off the rails since her departure. However, this didn't add any real depth to the episode, and almost felt as if it was a separate entity altogether. Ultimately, the moment just got lost in the episode.

Stephen Graham also made a more welcome return, albeit briefly. On the one hand, Stephen’s acting is a moment of saving grace but on the other, his character has no real meaning. Considering Peaky Blinders has an incredible calibre of actors it's such a shame that the storylines have completely changed the energy and pace of the show – unfortunately for the worst.

It's an incredible missed opportunity to have actors like Stephen Graham and Tom Hardy and not give them any storylines of real substance.

To answer last week's question… Finn is indeed still part of the show although he only appeared in episode 5 for a brief few moments. He informed Arthur about someone not pulling their weight in the betting shop, and just highlights another missed opportunity for character development as Finn (played by Harry Kirton) had become a fan favourite over the years. I can't help but feel like it would have been essential to showcase his character more in this series.

Overall, episode 5 had no real story and didn't add anything to the series whatsoever. The show is becoming all filler, no killer. It's such a shame for a program that was once king to fall so far down on its final series. Unless something unexpected happens in the final episode, I’ll be left feeling that Peaky Blinders ran for a series too long. 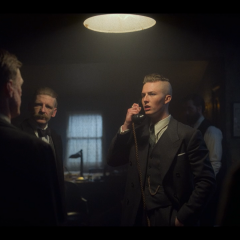 Voice reviews every episode from the final series of Peaky Blinders