The Bafta Game Awards are back set to be in person after two years online, and we recap 2022’s breakthrough nominees.

The BAFTAs do not immediately strike one as a body that champions video games as an artistic medium, but it does. Every year, alongside the film and television awards, there is an awards show for games to give recognition to the talents of those in the industry from actor performances to celebrating specialised crafts.

The Bafta Games Awards have existed since 2004, and all awards are voted by BAFTA’s membership of games industry professionals with the exception of the EE Game of the Year award which is voted for by the public. This year’s fan-voted nominees include Chicory: A Colorful Tale, DEATHLOOP, The Forgotten City, It Takes Two, Metroid Dread, and Witchbeam’s viral sensation Unpacking.

This year’s awards are due to return to an in-person event, after two years of the awards taking place online. They are set to take place on Thursday 7th April at Queen Elizabeth Hall in London, with presenter and journalist Elle Osili-Wood returning as the host. With 18 categories to win from, this year’s awards show is highly competitive, reflecting the wonderful year that the gaming industry has seen.

Leading the pack as the frontrunner with nine nominations is Housemarque’s Returnal, a third-person shooter video game set on a hostile alien planet called Atropos. Returnal has nominations including Best Game, Original Property, Best Narrative, Game Design, and Music. Following closely behind, with eight nominations each, are It Takes Two and Ratchet & Clank: Rift Apart. The racing video game Forza Horizon 5 has six nominations, and Marvel’s Guardians of the Galaxy has five.

For the coveted Best Game category, there are six nominees: Arkane's Deathloop, Playground’s Forza Horizon 5, Inscription, It Takes Two, Insomniac’s Ratchet & Clank: Rift Apart, and Returnal. In the past, this highly sought after accolade has gone to games like Hades and God of War.

In the Best Narrative category, the nominees are It Takes Two, Life is Strange: True Colors, Marvel’s Guardians of the Galaxy, Psychonauts 2, Returnal, and Unpacking.

There are several categories singling out individual craft achievements such as Technical Achievement, Artistic Achievement and Audio Achievement.

In the Best Performer categories, there is the return of Laura Bailey hot off her win last year for ‘Performer In A Leading Role’ as Abby in The Last of Us Part II – a year that saw her co-star Ashely Johnson who played Ellie also nominated in the same category.

This time around, the voice acting legend Bailey is nominated in the ‘Performer in a Supporting Role’ category for her work as Polina Petrova in Call of Duty: Vanguard alongside fellow nominees Kimberly Brooks (Hollis Forsythe in Psychonauts 2), Jason Cavalier (Drax in Marvel’s Guardians of the Galaxy), Maggie Robertson (Lady Dimitrescu in Resident Evil Village), Han Soto (Gabe Chen in Life is Strange: True Colors), and Alex Weiner (Rocket in Marvel’s Guardians of the Galaxy). 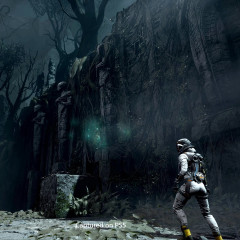 The Bafta Game Awards are back set to be in person after two years online, and we recap 2022’s breakthrough nominees.