Here’s everything you need to know about the 2022 Critics Choice Awards 2022.

Award season. Glitz, glamour and a whole lot of stars. The Critics Choice Awards 2022 did not disappoint.

Some nominees like Lady Gaga, Ariana Debose and Troy Kotsur managed to attend both thanks to a satellite ceremony at London’s Savoy Hotel following the BAFTAs ceremony.

Big wins for the night included director Jane Campion, who mirrored her BAFTA success in a single night and lifted up the Best Director award for ‘The Power of the Dog’. This follows her making history at the 2022 Directors Guild Awards where she became the second woman to win the theatrical feature film director award following her ‘The Piano’ win in 1993.

The award power of ‘The Power of the Dog’ does not stop there. In total, they received more accolades than any film of the night with 4 awards – all top prizes of the night. The Western Netflix film also won Best Picture, Best Adapted Screenplay, and Best Cinematography for Australian cinematographer Ari Wegner.

Ariana Debose (West Side Story), Troy Kotsur (CODA) and Will Smith (King Richard) all won their equivalent acting prizes at the Critics Choice and BAFTAs on the same night (Best Supporting Actress, Best Supporting Actor, Best Actor). This makes their chances of picking up the esteemed Academy Award in two weeks' time all the more likely.

Best Actress went to Jessica Chastain for her work in ‘The Eyes of Tammy Faye’.

There was also a touch of British success at the Critics Choice Awards, including Kenneth Branagh’s Best Adapted Screenplay win for his semi-autobiographical film ‘Belfast’. The star of the film, newcomer Jude Hill, won the Best Young Actor award at eleven years old.

Surprisingly, ‘The Mitchells vs the Machines’ beat the favourite ‘Encanto’ to nab the top animation prize, Best Animated Feature.

In the winners by series for the 27th Annual Critics Choice Awards, there were big wins by Apple TV+’s comedy series ‘Ted Lasso’ and HBO’s acclaimed big business drama ‘Succession’.

Bo Burnham won Best Comedy Special for his Netflix one-off ‘Bo Burnham: Inside’ which was frankly the soundtrack of most people’s lockdown.

Jane Campion – The Power of the Dog

Jane Campion – The Power of the Dog

Ari Wegner – The Power of the Dog

The Eyes of Tammy Faye

The Mitchells vs the Machines

BEST SUPPORTING ACTRESS IN A LIMITED SERIES OR TV MOVIE

BEST SUPPORTING ACTOR IN A LIMITED SERIES OR TV MOVIE

BEST ACTRESS IN A LIMITED SERIES OR TV MOVIE

BEST ACTOR IN A LIMITED SERIES OR TV MOVIE

BEST MOVIE MADE FOR TELEVISION

BEST ACTRESS IN A COMEDY SERIES

BEST ACTOR IN A COMEDY SERIES

SUPPORTING ACTOR IN A DRAMA SERIES

BEST ACTRESS IN A DRAMA SERIES

BEST ACTOR IN A DRAMA SERIES 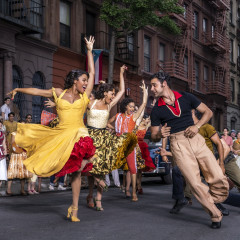 Here’s everything you need to know about the 2022 Critics Choice Awards 2022.