ABBA have announced they will be delaying their album promotion due to the tragedy in Sweden.

ABBA are delaying the promotion for their upcoming record due to a tragic accident that happened during an ABBA tribute concert this Tuesday. The band tweeted out on Wednesday, saying: "In light of the tragic news at the tribute concert in Sweden last night, we have decided to hold off on releasing our concert trailer until tomorrow".

The tribute show was held at the Uppsala Konsert and Kongress hall north of Stockholm. The accident happened when an elderly man fell down seven floors, falling onto two people below. The elderly man, as well as one of those that he fell onto have died. The other person involved has been taken to a hospital to treat their injuries.

Around 1,000 people were in attendance at the tribute concert, named ‘Thank You For The Music’, in honour of ABBA members Bjorn Ulvaeus and Benny Andersson. The accident happened around 30 minutes before the show was set to start, the man fell and landed in the venue’s foyer. At this time, no victims have been identified, but the BBC has cited that police have said the man was over 80 years old, and the man he fatally fell onto was in his 60s. The survivor of the accident was reportedly also in her 60s.

Police Spokesperson, Magnus Jansson Klarin stated to Euro News: "We received a call regarding a person who either jumped or fell from a great height inside the concert hall in central Uppsala." The police have announced that they have no reason to believe that any crimes have been committed in connection to the fall.

The venue of the concert has said that they were “shocked by the tragic event”, and sent their thoughts to the loved ones of those lost, and they have also offered counselling and grief resources for those affected by the accident. They will also be repurchasing the tickets from the cancelled concert, and shows will resume from Saturday.

The real ABBA delayed their album trailer in regards to the event. They have released their highly-anticipated album ‘Voyage’ today however, which is their first album of new material in four decades. They also plan on performing a ‘digitised avatar’ based concert in London on 22 May next year, designed by a company that worked on the special effects of the Star Wars films. The so-called ‘Abbatars’ will depict the full band as they looked in 1979. 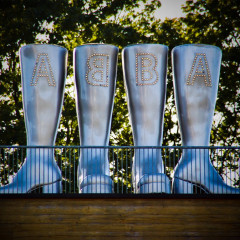 Two people have died at an ABBA tribute concert

ABBA have announced they will be delaying their album promotion due to the tragedy in Sweden.