Digital likenesses of the band will take to the stage in London in 2022.

Iconic Swedish band Abba have announced that they will be releasing new material in November, the first since 1981’s The Visitors. The album will be supported by a run of virtual concerts in London, beginning in May 2022.

Two new songs from the upcoming 10-track album have also been released, I Still Have Faith in You and Don’t Shut Me Down. The virtual concerts will take place at the newly built 3000-capacity ‘Abba Arena’ in London’s Olympic Park and will feature digital and de-aged versions of the band (reportedly not holograms) performing alongside a 10-piece live band. These digital likenesses have been created using motion capture technology and have been dubbed ‘Abbatars’. They will be performing material that the band has recorded especially for the event. Tickets go on sale 7 September.

The quartet, comprised of Agnetha Fältskog, Anni-Frid Lyngstad, Benny Andersson, and Björn Ulvaeus, formed in Stockholm in 1972 and never split formally but dissolved as a creative unit in 1982 sometime after two divorces within the band – between Fältskog and Ulvaeus, and Lyngstad and Andersson.

The band announced their reunion via their British manager Simon Fuller back in October 2016, after performing together at a private party in Stockholm, their first time performing together since 1982. The announcement stated that they would be working on a ‘digital entertainment experience’, which would be ready by spring 2019. In April 2018 the band themselves announced they had recorded new material. The tour and the release of the new material was pushed back several times due to the costly and complex nature of the virtual tour and then due to Covid-19.

The band have expressed their happiness at being reunited, with Lyngstad commenting, “Such joy it was to work with the group again – I am so happy with what we have made.” Ulvaeus has said of Lyngstad and Fältskog, the group’s singers, “I was completely floored by the way they delivered those songs,” and Andersson has added “I think hearing Frida and Agnetha singing again is hard to beat.” 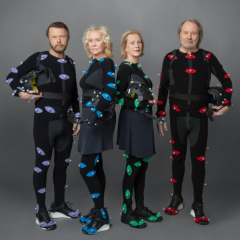 Digital likenesses of the band will take to the stage in London in 2022.