Grown is a powerful YA story that examines rape culture and the vulnerability of young black girls.

In the wake of R Kelly’s recent conviction, Grown is more timely than ever. The novel begins inside Korey Fields’s apartment: Enchanted Jones is covered in blood, and Korey Fields is dead. For Enchanted, this is not how things were meant to go. Before Korey wound up murdered, the seventeen-year-old was an aspiring singer, struggling to cope with her parents’ recent move to the suburbs. But when she catches R&B artist Korey’s eye at an audition, her life takes a drastic turn. Korey is quick to sweep Enchanted up under his wing, promising her record deals and albums, but beneath his charm lurks a controlling predator. When his body is found, all signs point to Enchanted and the victim-blaming begins.

Grown is a fast-paced and compulsive read. The chapters are extremely short, allowing you to fly through the book in one sitting. However, this comes at a cost. As each chapter is only a few pages long, some of the novel’s finer details fall through the cracks, especially towards the end of the story, where the pace of the plot increases. Jackson gives us the most important scenes – the ones that are crucial to the novel’s progression – but it feels as though details are left unsaid for the sake of brevity. As a result, the plot can feel slightly fragmented as we get thrown from one scene to the next.

Nonetheless, Grown is a powerful and deep story. Through the character of Enchanted, Jackson exposes an ugly truth: poor and black teenage girls are highly vulnerable. Enchanted is not just abused by Korey but by a whole structure. Even though numerous allegations are made against Korey, he continues to thrive as an artist because of his money and status in the music industry. Similarly, the justice system initially refuses to recognise Enchanted as a victim. The police and media do not sympathise with her. Instead, they blame Enchanted for the emotional and physical abuse she suffered at the hands of Korey. In this sense, Jackson highlights the way in which we, as a society, have failed girls like Enchanted, as is demonstrated by the length of time it took for R Kelly’s conviction.

Overall, Grown is a gut-wrenching story that gives voice to vulnerable and abused girls who may not be able to speak up for themselves. 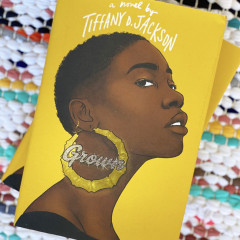 Grown is a powerful YA story that examines rape culture and the vulnerability of young black girls.