Basil Brush is an undeniable British icon. Michael Winsor adeptly took over the role back in 2002 after the passing of Ivan Owen and has since made appearances on a number of classic comedy shows such as The Last Leg and Celebrity Juice.

Growing up watching The Basil Brush show, as some of our readers will surely have done, it may be odd picturing the children’s show staple making dirty jokes and coy references on his chat show style Fringe performance. Perhaps it's fortunate then, that Basil Brush Unleashed Vol. 2 is for the most part adult in name only.

This isn’t necessarily the worst thing in the world. There are bits of comedy in the performance that can be enjoyed by any ages, with snide references to the pandemic and bits of pop-culture; his fast-paced song about what’s on TV was unironically a jam. In fact, Basil’s on-stage partner Mr Martin, despite channelling kid’s-show-host energy, did an excellent job keeping the show on track and laying the groundwork for Brush’s gags. That said, there were perhaps one too many jokes about how he likes to be “taken up Arthur’s Seat,” for my liking – very ‘early 2000s.’

On that note, many of the jokes felt quite dated. I had heard most of Brush’s quips and puns before, and not necessarily from him. Combining this with the frequent rehashing of old highlights, like pictures of him with celebrities or clips from YouTube videos he made during lockdown, deflated some of the immediacy that is essential to live theatre.

This isn’t to say the show was without creativity. The highlights for me came whenever there was a reference to “the strange man under the desk,” a bit of fourth wall breaking that resulted in a couple of extra-dodgy innuendos that went some way towards earning the title ‘unleashed.’ I’ll say no more, but the image of Winsor’s hand waving to the audience whilst the puppet he’s controlling asks Mr Martin to “guess where the other hand is” will stick with me for a long time.

On a less childhood-destroying note, it was impressive witnessing first-hand the puppetry skills of Winsor. He injects his fox with so much personality and charisma, despite the static nature of the puppet’s expression. Many of the audience-wide laughs came from simple visual gags from Basil Brush himself, even when they were as unassuming as going up and down in an invisible lift.

Overall, the main issue may have been the difficulty in translating the show’s format to live performance. The guest comedian came and went midway through the show, and although he was funny, he wasn’t present long enough to really warrant his addition. It felt more like he was interrupting the show than anything else. The show was split into so many sections that it all felt a little bit too haphazard.

Basil Brush and Mr Martin are a sizzling combination of comic stylists, but much needs to change for their show to really live up to their talent. 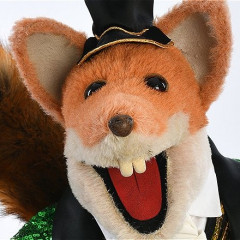