The graphic novel Good Talk is a deeply moving yet hilarious memoir, which attempts to answer some of life’s most difficult questions.

Mira Jacob is the author of the critically acclaimed novel The Sleepwalker’s Guide to Dancing. Good Talk, her most recent work, has been featured in the New York Times, Vogue, Glamour, Tin House, Electric Literature, and Literary Hub. Good Talk is quite literally a ‘memoir in conversations’. The novel is composed of conversations between Mira (Indian American), her husband (Jewish), their six-year-old son Z (Jewish Indian American), their family, and several insensitive strangers. The book spans Mira’s life, from her childhood to her career. All of this then builds up to the 2016 election as Mira examines what it means to be a person of colour living in Trump’s America.

For a graphic novel, the artwork in Good Talk is unusual. Good Talk is made up of a series of photographs, which are superimposed with illustrations of Mira and the people she converses with. The drawings are fairly simplistic; they are black and white, and the same drawings are repeated throughout the book. However, the graphics work extremely well. The repeated illustrations and blank expressions add to the humorous nature of the novel. Similarly, the photographs are effective as they set the scene for the conversations and add realism. For example, the photograph of the armed police in Ferguson effectively illustrates the horrific shooting of unarmed teenager Michael Brown in 2014.

However, the standout quality of Mira’s novel is the ‘good talk’ that it prompts. Z’s questions to Mira are difficult, and they spark uncomfortable conversations. But these conversations are important. For example, following 9/11, Z asks Mira, ‘are white people afraid of brown people?’. It is admirable how Mira jumps into these conversations even when she cannot always provide an answer – this encapsulates the difficulty of raising a child in a world that is fraught with racial hostility. In this sense, Good Talk is not only Mira’s personal story but all of our stories, as the novel illuminates the world in which we live.

Good Talk is one of those books that everyone should read at least once. 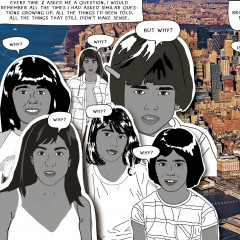 The graphic novel Good Talk is a deeply moving yet hilarious memoir, which attempts to answer some of life’s most difficult questions.