The Suicide Squad, or Task Force X, has always been a fan favourite in comics, and the reveal of 2016’s Suicide Squad filled viewers with anticipation. Taking a group of D-list DC degenerates, planting bombs in their heads and sending them out on bizarre and often deadly missions in return for shaving time off of their sentences… There's a lot of interesting stuff that can be done with that, and a live action film could propel the team to a whole new level of exposure.

When I went to see the 2016 adaption, my own (probably unfair) expectations were not met, so when I heard about a new Suicide Squad movie, I tried to manage my excitement. This became much harder when I heard James Gunn was directing the film, and almost impossible when I saw the cast list. And so, despite my best intentions, I went to see The Suicide Squad with my expectations through the roof.

It delivered. And boy did it deliver.

James Gunn’s experience with The Guardians of the Galaxy made him a perfect fit to direct. Both films feature an oddball cast of characters uneasily united in a common goal, with an expertly chosen soundtrack to go along with it. However, it’s where the two properties differ that the twisted beauty of The Suicide Squad comes out in force. Unlike the Guardians, this is not a rag-tag team of lovable weirdos who’ve made some mistakes in the past but ultimately have hearts of gold.

They are murderers and psychopaths, and some are just complete and utter douchebags. I am fully convinced that John Cena’s character would have been a Trump supporter, and that’s okay because the film is crafted around the fact that these are not good people. There may be some that we have sympathy for – and they give the film no small amount of heart –  but the audience is able to fully immerse themselves in the over-the-top action, cartoonish brutality and total disregard for anything resembling heroism specifically because of how laughably unpleasant the protagonists are.

But that isn’t to say the film is without stakes. Far from it, in fact. The biggest surprise to me coming out of the cinema was how invested I got in the characters and story. It may be one of the toughest balancing acts in film. How do you achieve a tongue in cheek tone without alienating the audience from the emotional or dramatic beats of the story? The Suicide Squad, by the end of the film, passes this test with flying colours. One particular scene that comes just before the final act draws out a genuine sense of dread and horror, ending in a character conflict that has been built up throughout the narrative, but always played as a joke until it very suddenly is not one.

The Suicide Squad smashes every expectation I had, and other than some pacing issues there’s nothing about it that’s not to love. I’d recommend this to anyone who thinks superhero films need to be shaken up. It’s original, stylish, and an incredible amount of fun. 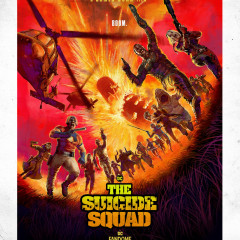