Transcendent Kingdom is a deeply thoughtful novel that paints an unforgettable portrait of familial loss, addiction, depression, and the conflict between faith and science.

First published in the U.K. this March, Transcendent Kingdom is Yaa Gyasi’s latest novel. Gyasi is best known for her Sunday Times bestseller Homegoing – a multigenerational tale of two sisters and their descendants, spanning from the era of slavery to the present moment.

Transcendent Kingdom is very different from Homegoing. It has a much narrower scope as Gyasi chooses to focus on one Ghanian-American family living in Huntsville, Alabama (her hometown). Nonetheless, Transcendent Kingdom contains much of the same splendour as Homegoing. The novel is narrated by Gifty, a PHD science candidate for Stanford university. The novel traces the disintegration of Gifty’s family – her father’s sudden departure from America, her brother’s drug overdose, her mother’s battle with depression – and Gifty’s ensuing grief. All the while, the novel posits the question: will science or faith heal Gifty?

Perhaps what makes Transcendent Kingdom so incredibly powerful is Gyasi’s attentiveness. Her attention paid to the structure of the novel, in particular, is commendable. Transcendent Kingdom gorgeously interweaves flashbacks to Gifty’s childhood with her current scientific work. Although the chapters set in Gifty’s laboratory can feel jarring – clinical and emotionally detached – they successfully reveal the extent of her psychological trauma. Her experiments on the mice highlight her desperation to heal both herself and her fragmented family as she attempts to find a cure for depression and addiction.

However, the scientific language used in the chapters set in Gifty’s laboratory can feel esoteric. In a similar sense, the long quotations of Biblical scripture can feel slightly excessive. But, for the most part, you cannot help but marvel at Gyasi’s writing. One quite unforgettable quote is this: ‘There was [...] a smell, that funk of depression, sturdy, reliable like a piece of furniture’. Here Gyasi transforms depression into a tangible object, illuminating the way in which depression has invaded Gifty’s home and ravaged her life with its pervasive smell. Gyasi’s beautiful writing adds a sense of poignancy to the novel.

Overall, Gyasi’s incredible storytelling and mastery of language have elevated her to the same status as Toni Morrison. Like Homegoing, Transcendent Kingdom is destined to become a modern classic. 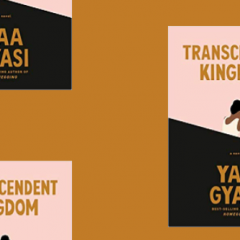 Transcendent Kingdom is a deeply thoughtful novel that paints an unforgettable portrait of familial loss, addiction, depression, and the conflict between faith and science.