Performed in isolation and filmed entirely by Helen Manners and Ian Renshaw, The Travesty of Richard III is a comedic adaptation of William Shakespeare’s original tragedy that depicts the eponymous character’s rise and fall from power.

The Travesty of Richard III takes Shakespeare’s iconic dramatic tragedy Richard III and infuses it with a sense of comedy for modern audiences. Starring Ian Renshaw and Helen Manners, the production begins with a narrated voiceover that briefly explains the context behind the events leading up to the play, while also referencing the circumstances in which the piece was created. The piece depicts the rise of Richard, Duke of Gloucester, as he schemes to become the King of England and his eventual downfall, while omitting several plot points for the sake of brevity, as noted within the show.

As the piece features a cast of only two people, Renshaw and Manners both shine, as they portray more than four characters each throughout the course of the production. Renshaw is particularly impressive as the Machiavellian Richard, imparting a sense of underhandedness with every syllable, while Manners also excels in her roles as George, Duke of Clarence and Queen Elizabeth Woodville, bringing both dramatic and comedic moments through her performance.

Given that the production was entirely filmed in isolation and with the use of green screens, the chemistry between Manners and Renshaw when they are on-screen together is organic and does not feel overtly disjointed. This is aided by the frequent use of closeups when each character is speaking, allowing viewers to focus on what is being said rather than any potential awkwardness of movement or placing. Additionally, each character is distinguishable from one another through the use of good costuming, mitigating audience confusion throughout the piece’s runtime.

The Travesty of Richard III is genuinely funny as well, eliciting many moments of chuckling or outright laughter from myself as I watched the show. From the bawdy humour that punctuates the production, to the unabashed insults hurled by Queen Margaret D’Anjou and moments of fourth wall-breaking, viewers will be entertained by the piece. The character of The Murderer is particularly comical and is depicted with a stereotypical Yorkshire accent before committing an assassination in a ludicrously amusing manner. The balance struck between Shakespearian and modernised dialogue felt well-done, keeping important passages or speeches intact in some parts, while maintaining clarity through the use of updated colloquial language.

However, the production of The Travesty of Richard III does stutter in parts. At times, the dialogue spoken by characters is slightly muffled, making it difficult to clearly decipher what is being said, with this difficulty being exacerbated in moments of Shakespearian dialogue. Additionally, towards the end of the show, when the Duchess of York is on-screen, the character appears to be somewhat pixelated and blurry, briefly distracting from the narrative momentum of scenes.

Regardless, as someone who has never seen or read Shakespeare’s original production, I was left feeling as though I had a good grasp of the narrative and characters, which is a credit to the work done by Manners and Renshaw.

The Travesty of Richard III is overall a lighthearted, well-crafted and uproariously humourous production, and is definitely a must-see show at Brighton Fringe this year! 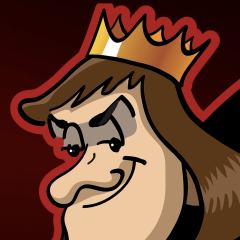 The Travesty of Richard III

Performed in isolation and filmed entirely by Helen Manners and Ian Renshaw, The Travesty of Richard III is a comedic adaptation of William Shakespeare’s original tragedy that depicts the eponymous character’s rise and fall from power.