Released in February 2021, Ben Nicholas and David Tryhorn’s documentary Pelé chronicles the Brazilian football player’s career and connection with his nation. Find out our thoughts on the documentary in this review!

Released in February 2021 and directed by Ben Nicholas and David Tryhorn, the Netflix documentary Pelé aims to shed light on the eponymous football player and focuses on the 12 year period between 1958 and 1970, during which Brazil achieved 3 World Cup victories.

The documentary begins with a brief glimpse of the 1970 World Cup before moving backwards for a chronological coverage of Pelé’s life. With archival footage of football matches and the time period, combined with interviews with Pelé, his contemporaries and other journalists, the directors attempt to create a sense of immersion, that is for the most part successful. Contrastingly, a current-day reunion between Pelé and his international teammates that is filmed for the documentary comes off as overly contrived, with the group’s camaraderie feeling forced and excessively Pelé-centric.

The most interesting aspect of the documentary for myself was the sense of interconnection that is drawn out by Nicholas and Tryhorn between Pelé and the country of Brazil as a whole. In an interview for the documentary, former Brazil president Fernando Henrique Cardoso states that ‘Pelé’s achievements are intertwined with the national glory, no matter who wins. Dictatorship or democracy’. This sentiment appears to be echoed by several people interviewed throughout the documentary, setting up Pelé as a figurehead for the people of Brazil to project themselves onto. In essence, his successes and failures are portrayed as being inextricably linked with the nation’s successes and failures as well.

The documentary does not shy away from highlighting Pelé’s life off the football pitch either, with one segment focusing briefly on his personal life, while another unpacks his interactions with the dictatorial regime of Brazil which was in place from 1964 - 1985. While both segments were compelling insofar as presenting Pelé in a more human light, I was left wanting more information before the focus of the documentary shifted away from these topics.

The documentary is ultimately about Pelé as a football player and Brazilian icon, and as such, climaxes with the nation’s victory at the 1970 World Cup, which was Pelé’s final international tournament.

A documentary that underscores the connection between Pelé and his nation but perhaps falls foul of lionising the player too much, Pelé is available to stream on Netflix now! 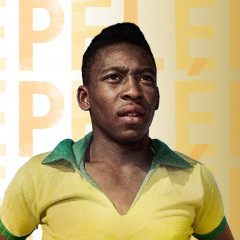 Released in February 2021, Ben Nicholas and David Tryhorn’s documentary Pelé chronicles the Brazilian football player’s career and connection with his nation. Find out our thoughts on the documentary in this review!