The Voorman Problem (2011) was a British short directed by Mark Gill. Produced by Baldwin Li and Lee Thomas, this film was first premiered at the Warsaw Film Festival in 2011, which was later nominated for a BAFTA  Award for Best Short Film.

A doctor (Williams) is asked to examine a prisoner (Mr Voorman) who believes he is a god himself. Williams must decide the sanity of Mr Voorman, who becomes sceptical of the prisoner's insanity due to incidents.

The genres of this short film can fall under drama, mystery, fantasy and short as it combines the elements of mystery with the supernatural as well as being dramatic. This is unconventional as most films fall under one/two genres rather than four.

Narratives structures vary depending on the plot of the film and how it is written. The narrative structure of this film is linear as it does not refer to any flashbacks, allowing the passage of time to be shown easier in the film.  We are viewing from the perspective of the doctor (Martin Freeman) , as we view his home, relationship and the main focus is on him in most shots. The story develops as we follow him to an office in which he was asked to try and help a patient who believes he is god. As the patient is revealed to be a prisoner, it is told that he has made his prison inmates believe the same. The doctor begins his sessions with the patient until he begins questioning whether he is telling the truth or not.

In this film, both diegetic and non-diegetic sound are used to help immerse the audience. The film begins with an upbeat score (non-diegetic) to show the credits, before we see the doctor walk outside a prison that is  shot with a wide angle lens. As he walks to the prison door and presses the buzzer, diegetic sound of static and ambiguous noise can be heard through the buzzer. As this is heard, it zooms in on the doctor's face before he walks off-screen. This creates enigma as the audience doesn't know where the character is going or if he is in danger.

Various camera techniques are used to engage the audience as well as build tension as the story develops. When they talk about treating the prisoner, over the shoulder shots are used to show the conversation from both perspectives. In the shot above, the camera is handheld to show the urgency of the Doctor as he searches for something. When tension begins to build, it zooms in on the subject to make the audience focus on them.

Close up shots are used when the doctor and patient have a conversation as it gets more intense, the shots come closer to the characters' faces. This creates tension for the audience as well as showing the character's attitudes towards each other, which are portrayed to be negative.

In post-production, the editing can often impact the movie's general success as it such a crucial part of the process. At the beginning of the film the opening credits were shown on top of the establishing scene. The editing is used in this film to help create smooth transitions between effects such as when the doctor and prisoner switched places seamlessly.

Cuts are the main type of transition as it shows the passage of time as well as establish a pace for the film. This film often keeps the camera shooting a few seconds after the action in the shot to make the audience uneasy as well as create suspense and enigma.

Set in present day (2011 then) England, the locations vary between a psychiatrist's home, from the street, the office in the prison and one of the cells in the prison. This is a small number of locations as short films often have a lower budget (as they may be independent filmmakers) than high-budget films. This does not negatively affect the film, as it only had a limited time to establish and transition to different locations (due to being a short film).

Mise-en-scene is a vital part of media production as it allows realism to be brought into film/television show as it is the 'surroundings' that aid the narrative. Media conventionally uses visuals to help tell a story, which is where mise-en-scene is involved. Mise-en-scene includes elements such as actors, props, costume, lighting and location.

Proxemics are used in this shot to show the relationship between the psychiatrist and the prisoner. As they are strangers, the distance between them shows the emotional disconnect and the lack of understanding. When showing intimacy in film, characters are often shown together close in frame.
The use of foreshadowing allows information to be revealed to the audience before the event/information appears on-screen. Before the dialogue has even began, we are aware lack of connection between the two characters. There is no emotions present, showing the work relationship between the two as well as show the doctor's professionalism.
Body language is also part of mise-en-scene, which conveys the narrative as well as the character's personalities. Freeman's character (doctor) stands up straight, showing his confidence as he enters a room to meet a known prisoner. This differs from Hollander's (the prisoner) posture, which is slumped over to show his disinterest in the interaction. The juxtaposition of the doctor's posture compared to the prisoner's shows the audience how different their personalities and attitudes are.

They used known-actors in this film which may attract other audiences outside of the target audience as they will be fans of other content with the actors in. Martin Freeman is one of the main characters, which will bring his fanbase to this film due to his participation. Martin Freeman fits the role of the doctor as he often plays roles that are considered protagonists. Knowing this, the audience expectations of him being a protagonist are common which fits with the narrative.

One piece of costume that turned into a prop was the straitjacket, as it switched to Martin Freeman wearing it being restrained by it. This is a prop as it enhances the storyline as without it, the doctor would be able to escape the room. This insinuates that he's the patient rather than the doctor, which is a large twist in the narrative seemingly unexpected by the audience. His facial expressions show the distress he's in and communicates to the audience that he needs help, which is visible without audio.

Lighting is used in this film to show the 'good' versus 'evil' theme, as the prisoner claims to be a god. Light is often associated with religion and hope, which surrounds the prisoner more than the psychiatrist to allude to future events. The doctor wears dark clothing, which contrasts to common symbolism of dark colours being 'evil' even though he is portrayed as the protagonist. Unconventional themes continue as the prisoner wears white, often known to symbolise purity and religion.

I believe the target audience of this film is 12+, as the original age rating of the film is PG (parental guidance).  Although the age rating is PG, there are dark themes present as it is about a psychiatric patient which some children may find distressing. After viewing this film multiple times, my opinion is that it has a deeper meaning a more mature audience would appreciate. Another audience I think this film is suited towards viewers who watch drama, as I believe that is a main theme in this short as it is dramatic throughout.

After watching this film, I have a lot of thoughts and questions unanswered as it ended on an open-ended narrative with a twist. The characters' personalities are represented well however they are not developed thoroughly, although this may be difficult to achieve as there is a limited amount of time to show the narrative. One reason why I enjoyed this film is because made me question a lot of the content in it as well as ponder on the ending of the film.

This has inspired me to see more from this film maker as it is unconventional and included a large plot twist which I (as an audience member) was not expecting. The dialogue is chilling to hear as the doctor asks ordinary questions, receiving ambiguous answers for the audience to interpret. I would love to view other media under this subgenre as I haven't seen films like this often and I enjoyed the combination of different genres.

My favourite type of films are ones that are often unconventional as they stick out to me than other films. I can strongly say this film is one film I will recommend to anyone interested in dramas/mystery and independent filmmakers looking for inspiration.

In conclusion, I would recommend to watch this film because it features many great actors and makes you question the film's narrative as well want to re-watch it to look for more information. The film exceeds my expectations before viewing as I didn't expect the narrative turn out like that. If I had to rate this film out of five, I would rate it four out of five. 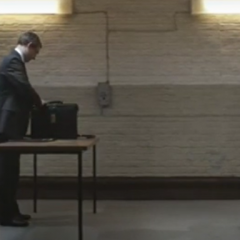 The Voorman Problem - who is telling the truth?

The Voorman Problem (2011) was a British short directed by Mark Gill. Produced by Baldwin Li and Lee Thomas, this film was first premiered at the Warsaw Film Festival in 2011, which was later nominated for a BAFTA  Award for Best Short Film. 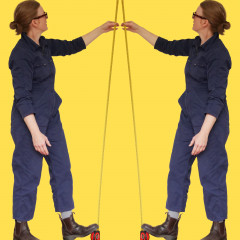