This is my review of Nutcracker and the Four Realms for my Bronze Arts Award. Please comment if you can. Thank you.

Film Review: The Nutcracker and the Four Realms

You might think you know the Christmas story of The Nutcracker, but you probably don’t know The Nutcracker and the Four Realms. Based on many of the familiar characters from The Nutcracker, this version is a lot different. Even so, it is still a very good film, because it’s thrilling and full of surprises.

The main character is a girl called Clara, who on Christmas Eve is given a mysterious present which is from her mother who died. The present leads her to a magical world called The Four Realms. There she goes on adventures and meets lots of different characters, including the Sugar Plum Fairy, the Nutcracker and Mother Ginger. She learns that she has to save the Four Realms, which her mother found in the first place.

Mackenzie Foy is Clara and is an amazing actress. However, I’m sorry to say I found Jayden Fowora-Knight who plays The Nutcracker a poor actor because he doesn’t seem very magical and isn’t good at playing the part. I enjoyed the plot twists which were very surprising. I really loved looking at the make-up and the clothes. One of my favourite things was the giant robot that Mother Ginger rides in because it is exciting to look at.

I was a bit disappointed that this film didn’t tell the actual story of The Nutcracker, but I still really enjoyed the film. I recommend it if you like magic and fantasy. 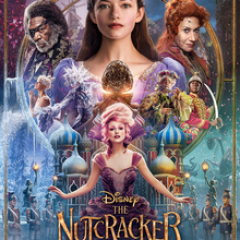 This is my review of Nutcracker and the Four Realms for my Bronze Arts Award. Please comment if you can. Thank you.