Voice MagReviewsSongs of the City

As part of New Creatives, Adelina Court has illustrated and directed animation Songs of the City, a beautiful and whimsical following of a blackbird above Manchester.

Watch 'Songs of the City' here.

A black bird spreads its wings. Soaring high over the busy city of Manchester, the bird flies among the people, the places and the picturesque landscapes. If you will, it takes in a birds eyes view while still feeling grounded and down to earth – amongst us and one of us.

The short film provides an interesting exploration of spectatorship. The viewer is the spectator, keeping a lookout for the slightest bit of movement, the stirring of feathers, searching for the blackbird within each scene. We watch the busy crowds, the monuments and the buildings of the city, as the bird becomes smaller, easily lost within the hustle and bustle of the huge concrete and urban surroundings.

As viewers, we are seeing through the artist's eyes, watching what the film-makers see. It is observation and close-detail that perfectly encapsulates the city of Manchester. From its canals and waterways to the tram system that dominates the central transport system. From its library to its museums, its music venues to its back alleys. We follow the route from the canals as though we are walking alongside into the inner city, along Deansgate and into the epicentre. It encapsulates Manchester’s energy and city living. A small singular being almost swallowed up in a ginormous metropolitan environment.

The animation showcases an adoration of architecture and the built-up surroundings but at the same time celebrates and highlights the need for nature to persist within such cosmopolitan habitats. It is the natural world persevering within man-made structures, exposed to the oddities and normalities of everyday Mancunian life and adapting appropriately.

The style of the short film is absolutely beautiful. Watercolours awash with tone and texture create the stunning illustrations that create this charming animation. Ink adorns the page as shapes are brushed into existence, forms created from the dark shapes of the paints that tell a visual story set to accompanying complimenting music.

The artwork is enchanting and whimsical, the designs intricate and skilled. This film is a work of art that encapsulates Manchester life and voyeurism at its best. 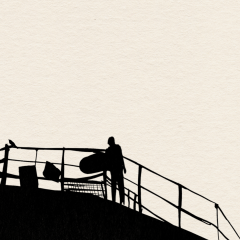 Songs of the City

As part of New Creatives, Adelina Court has illustrated and directed animation Songs of the City, a beautiful and whimsical following of a blackbird above Manchester.