Glitch delivers a deeply touching and grounded story about grief and finding your own path.

Glitch is an extended monologue telling the story of Kelly, a young autistic woman (played by Krystina Nellis) dealing with losing her dad whilst she tries to win her local speedrunning competition.

It’s hard for one person to hold an audience’s attention for an hour, but Krystina Nellis does a fantastic job. She has a persistent warm and endearing energy to her which keeps you wanting to know where the story goes next. She’s also just genuinely funny in a way that doesn’t feel artificial, but still has sharp comic timing and effective prop work. She almost feels less like a performer and more like a friend telling you a story. Due to this familiarity, when she did fumble lines it ultimately felt forgivable because the story and character are so endearing. This warmth and humanity also means that the darker emotional beats hit harder, because she makes you want the best for her.

Glitch never attempts to be particularly grand or sweeping, instead very much keeping its focus on the human drama. Now that doesn’t mean it doesn’t tackle important issues. A key part of the story is Kelly’s relationship with her autism and the cruel ways in which other people respond to her neurodivergence. The play has important things to say, but never feels aggressively didactic, instead making its points frankly and authentically through the direction that keeps Nellis as natural as possible. Her character never falls into just being a generalised portrait of autism through which certain messages can be conveyed. We are continually shown that speedrunning and her relationship with her father are massively important facets of her life, as well as the ways these things intertwine.

The combination of skilled acting, writing and direction helps to make her a full person in a way that autistic people often aren’t allowed to be in pop culture. Where else do you get to see a play which places an autistic woman at the centre, who is also given real agency over her own story?

As part of these considerations, the play also has stylised captions for every performance, which is clearly useful for not only D/deaf people but also people with the audio processing issues that are often associated with autism.

Crucially, Glitch speaks from a perspective rarely allowed to be heard in theatre and delivers the all-important message that normality is overrated. 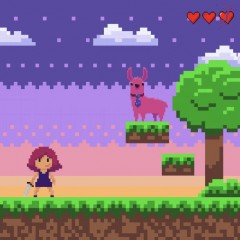 Glitch delivers a deeply touching and grounded story about grief and finding your own path.