There were nine different inviting and breath-taking performances that took place on the arts scene of the Urban Explorers 19 performance at Nottingham Playhouse. Written by Mia-LaShae Mitchell-Carter.

There were nine different inviting and breath-taking performances that took place on the arts scene of the Urban Explorers 19 performance on the 4th of July 2019. The one hour performance provided by the Tom Dale Company (who is in partnership with Inspire Youth Arts) showed their audience the urban landscape and the free flowing contemporary coming from the intensity and creativity of the UK’s electronic dance music scene.

Tom Dale is known for his work with the digital arts and electronic music. The Tom Dale Company is one of the Uk’s leading contemporary dance companies because of their combination of digital arts, electronic music and dance. In 2015, his work Dark Clouds was nominated in the Lottery Good Causes Awards as the performance showed the mental, emotional and physical effects WW1 had on veterans and their families. The productions involved 470 professional and non-professional performers aged between 8 and 80 and took place in cities all around the UK. Tom Dale also graduated for Laban winning the centres award for Outstanding Achievement in Choreography which pushed Dale to pursue his artistic vision. Artistic director Tom Dale is clear about his vision: to change the way audiences feel about seeing performance, to make work that challenged the perception of contemporary dance, to grow audience, to teach and to inspire the next generation of creative talent. He would also like to develop his collaborations with artists who are innovators in their own field.

All throughout the performance the set/staging stayed the same however the lighting in the background would change colour which i found very effective, as the colour would suggest the mood or theme of the dance. The expressiveness of the choreography was amazing and based off of strict discipline: the TDC dancers moved freely but not sloppily, it looked as though the dancers were free styling yet they were so on point with their timing and all 3 dancers moved together in unison which reassured me. The dancers were amazing! The musical arrangement is especially note-worthy, composer, sound designer and producer Jo Wills who is based in London, releases his own music but also teaches electronic music at a music and drama school, which would explain why the music was so breathtakingly good.

In conclusion, I would definitely go to another show as i thoroughly enjoyed it. The fact that the show only lasted an hour was even better for me as I tend to get bored easily, but the dancers, music, venue and everything else that came with the Urban Explorers experience contributed to my fantastic time at the show. 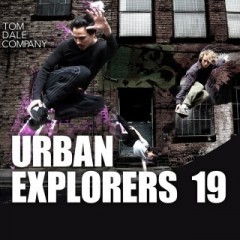 There were nine different inviting and breath-taking performances that took place on the arts scene of the Urban Explorers 19 performance at Nottingham Playhouse. Written by Mia-LaShae Mitchell-Carter.