Kirsten Vangsness, American star of Criminal Minds, brings a performance to the Assembly Rooms that is energetic, engaging and comical.

Kirsten Vangsness, American star of Criminal Minds, brings a performance to the Assembly Rooms that is energetic, engaging and comical. Fempire: Mess is a number of things, an almost autobiographical account of her early years back in California packed with some philosophical insights and mentions of Quantum mechanics.

Fempire: Mess celebrates chaos and Vangsness is a delight to watch. With subjects such as imaginary monsters, kittens, Christian rock and most prominently, the non-linearity of time. Inspired by a TED Talk named ‘Making Sense of a Visible Quantum Object’, you can believe that Vangsness’ one woman show is unlike any other. Mess is driven by Vangsness’ powerful and energetic delivery. Her performance is passionate, personal, zestful and animated and her stage presence is admirable.

Fempire: Mess is unique and unlike any other show you are likely to see at the Fringe. She speaks of her sexual and religious struggles and her performance in inimitable. The production is eccentric and distinctive and encourages the audience to think about life from a different perspective, and come to the conclusion that we all are in fact, a mess, and to embrace it.

With cosmic questioning and lots of witty stories, Kirsten Vangness’ performance of Fempire: Mess is definitely one to watch is you are looking for something that is fresh, innovative and funny. Her performance can be found in the Powder Room at the Assembly Rooms until the 24th August. 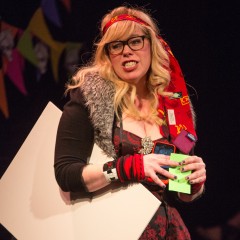 Kirsten Vangsness, American star of Criminal Minds, brings a performance to the Assembly Rooms that is energetic, engaging and comical.