Conspiracy shows how a single photo can become a global conspiracy.

Conspiracy entirely focuses on the conspiracy peddling trio at its centre, and the results are reasonably good on that front, with the cast having chaotic and continuous chemistry. The clashing of different demeanours and personalities is interesting to watch and genuinely funny. Out of the trio, Rose Wardlaw stands out with her dry and subtle tone, with great comedic timing and Shannon Hayes is incredibly fun throughout. Even with this great chemistry, not all of the dramatic moments land, rubbing against their generally relaxed and silly tones. There’s also lots of great prop comedy throughout the show which is generally pretty funny.

To some degree Conspiracy does something interesting with its subject matter, demonstrating the route by which something simple (a photo of men eating lunch on a skyscraper) could be turned into a serious conspiracy theory. Additionally, there are some really effective portrayals of the psyches and reasoning of the kind of people who would create and buy into conspiracy theories. Again the main issue here is that when the show tries to get into the more sinister side of conspiracy theories a lot of it just falls flat. This is especially true with a few moments that are meant to be big and shocking, but are more confusing than anything else - and not in a way that’s especially effective.

Conspiracy is a fun show that has some interesting things to say about conspiracy theories, but ultimately still feels a little underwhelming. 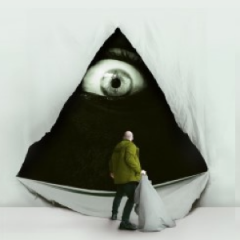 Conspiracy shows how a single photo can become a global conspiracy.