A great hour of music; whether or not you’re a Bond fan.

The band perform very well together, and all appear to enjoy themselves throughout. Nods to one another, working together, encouraging and supportive - it’s great to feel a positive vibe on stage as this comes off the stage to the audience too. They were very expressive in their faces and body language.

It’s not just music in this show, however. The lead singer (Phoebe Katis) talks a bit in between each track to give some of the story of the music’s evolution and background - which artists were up for consideration and how connections came about. They also used some video playback, a mock M delivering a bit of the story and this added another dynamic to make this a bit more of a story and not just a music gig.

It walks through the early years of Bond up to present day - not giving us every film of course, but really giving a flavour of how the style of music evolved over the decades. Every song delivered really well, with my favourite pick being their rendition of ‘A Licence to Kill’.

Katis engaged with the audience throughout, including direct eye contact, and occasionally walking offstage and out to us. There were a few technical glitches, from microphone feedback, to an accidental rerun of one of the video intermissions, and even what appeared to be a collapsing keyboard stand. But all the musicians worked together to rectify these, acknowledged them to the audience and just made it a part of what’s going on rather than a big issue.  So, whilst it wasn’t all smooth, it was human and kept the audience on side.

Audience members were congratulating the musicians on the way out, and clearly enjoyed the show. 007 Voices of Bond is an ideal light hour for a late afternoon to ease you in to an enjoyable evening of the fringe. 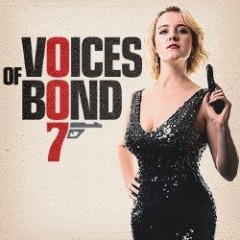 A great hour of music; whether or not you’re a Bond fan.