Beep Boop takes our obsession with screens to the stage.

Beep Boop is an hour of physical comedy about our cultural obsession with our screens.

The central performer in Beep Boop is our clown protagonist, a screen-obsessed and strange figure played by the exceptional Richard Saudek. Throughout the show, Saudek has amazing control of his physicality, commanding the space and making it impossible to take your eyes off of him. He’s also a master of mime, contorting his body to make his miming feel almost as tangible as the real props that he also worked incredibly well with. Whilst never speaking directly intelligible lines, Saudek does some incredible vocal work, playing with pitch and diction in a series of grunts which magnifies the grotesque feeling of the piece.

As if Saudek’s performance wasn’t enough, Beep Boop is elevated to another level by the amazing mix of sound effects, music and lighting, as well as the ingenious incorporation of videos and projections into incredibly funny scenes. This is at its best when this is used to parody Youtube culture or create ridiculous versions of familiar songs.

Silly, inventive and wild, Beep Boop is a masterclass in modern clown comedy that will be fun for all ages. 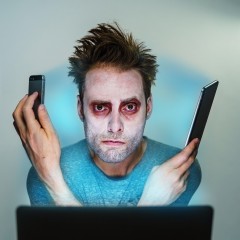 Beep Boop takes our obsession with screens to the stage.