With impressive animations and visuals, plenty of 'skanking' and lightsaber battles, Complicité’s 'I'll Take You To Mrs Cole!' is an 80’s paradise.

I’ll Take You To Mrs Cole is a family friendly show that will appeal to everyone, with impressive animations and visuals, plenty of 'skanking' and lightsaber battles – it’s an 80’s paradise. Complicité’s adaptation of the famous book is sure to be a hit with the kids. It follows the story of Ashley, a young, playful schoolgirl living at home with her mum. Ashley’s mum is constantly trying to get her to take responsibility for some household chores, but Ashley’s wild imagination gets the better of her, causing her poor mum to come home to total disarray in the house, which results in her threatening to take her to Mrs Cole.

The stand out factor for me was the spectacular lighting design that was used throughout the show. Projected onto the stage were exciting animation that is sure to set free your inner child. You are propelled inside Ashley’s mind as you see her playful imagination projected across the performance space.

I’ll Take You To Mrs Cole is lively and fun and there are 80’s inspired rock steady songs scattered throughout the show, though the singing sometimes feels unrehearsed and repetitive, and could do with some refinement. However this style of song is refreshing to hear in a children’s show and is a nice alternative to the stereotypical over sweet children’s songs.

Made up of a cast of three, the actors tackle the roles brilliantly. A highlight for me was Barry Fitzgerald’s character who takes on a role that acts as Ashley’s youthful conscious and inner voice. The two work greatly together and Fitzgerald is energetic and fun.

The scenes of Ashley transforming the house into her own playground are a particular favourite. The cast work together to create a horse made purely out of ordinary kitchen appliances and furniture, but to impressive effect. The direction and creativity is great.

I’ll Take You To Mrs Cole, performing at the Pleasance Courtyard, is one to please the whole family due to the 80's setting and fun, colourful performance. 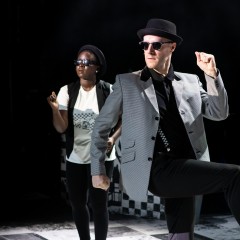 With impressive animations and visuals, plenty of 'skanking' and lightsaber battles, Complicité’s 'I'll Take You To Mrs Cole!' is an 80’s paradise.