Monsoon Season is a pair of back-to-back extended solo performances from both sides of a divorced and struggling American couple played by Richard Thieriot and Theresa Plaehn respectively as both of their lives spiral in a darkly humorous way.

Thieriot plays the awkward and messy Danny brilliantly, overcoming the challenge of having no other performers to bounce off of by filling the space with his presence. His awkward buffoonery is so charming that as the play gets progressively darker, with his obsessive and destructive behaviours emerging, you’re still not completely repulsed by him.

In the second half, (as Julia) Plaehn commands the space with her brazen overconfidence and her absolutely hilarious scenes operating her make-up Youtube channel. Whilst she is clearly never meant to be likeable, her intensity and energy are so powerful that you can’t look away, especially as her Adderall fueled spiral continues.

The story is largely told through vignettes of their lives, one after the other. Seeing the same story from these two entirely different perspectives means a lot of initial audience assumptions get reframed in the second half of the show, creating interesting revelations - especially when it comes to the sinister nature of each character. Whilst a lot of the issues created by only having one actor on stage are disguised by the great acting, effective mood-setting of the lighting and smart set design, sometimes a scene still feels like it lacks energy due to the lack of back-and-forth.

All things considered, Monsoon Season is a grim and twisted comedy that is fascinating to watch, as Thieriot and Plaehn masterfully guide you down into twisted darkness.

Header Image Credit: Thieriot Productions and All For One 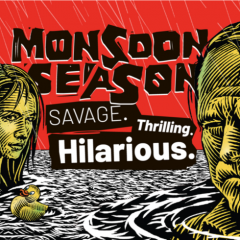