This performance is a wondrous blend between rap, academia and literature. We learn Brinkman’s background as a literature undergrad and as having an interest in socio-cultural criticism. He manages to blend two cultures which often remain unconnected in rap and hip-hop culture with literary criticism, sociology, psychology and biology. Most importantly it blends hip-hop with academia, education and intellectual critique.

Let’s be clear here, Brinkman is a phenomenal rap artist. His freestyling is raw talent, his ability to deliver and to improvise is exceptional. His raps are intricate, clever and well-formed. Like a lot of hip-hop they have clear political messages and serve as a form of social commentary. The show focuses on how culture is developed, and he discusses within his raps whether culture is a mix of biology, DNA and ancestry or whether it’s a product of societal expectations and learned behaviour. He’s reiterating the teachings of Freud and discussions of Darwin but in an accessible rap format.

This is a fantastic way of making academia and theological discussions accessible and interesting to new audiences. Otherwise it would remain in dissertations and books, the realms of academics and researchers. Brinkman brings it to the stage, to the fringe and most importantly, to the people and getting them thinking.

Academic study and education is often confused with intelligence, when actually they are disconnected. If ideas and discussions are presented in a suitable accessible format such as Brinkman’s rap, everybody can engage and suddenly it showcases that intelligent and interested individuals are not just the ones sat reading books or within higher education.

Brinkman enters a discussion of intelligence but related to what men and women find attractive, stating that 80% of women want the man they marry to be super intelligent. His discussions of gender ignore the fact that gender isn’t binary or biological making it somewhat problematic but he does briefly mention the percentage of the population that is transgender and LGBTQ so that’s something.

The trope of the act is that culture is created, learned and copied rather than innate and pre-ordained. He explores this using hip-hop and rap culture comparisons, showing how the culture breeds dominance and stereotypes but also showing how he breaks the mould and defies societies existing norms. It’s interesting, theoretical and talented performance. His rapping is hugely entertaining and impressive whilst you leave the space still thinking about the many theoretical  ideas thrown out during a rap. It provides food for thought and embraces opposing opinions and views, much like essay writing whilst clearly sharing his own experiences and thoughts through rap. 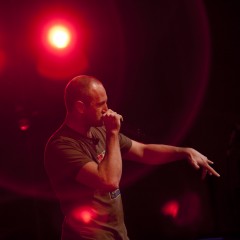