Sophie Duker starts her show with the song Venus, not the Shocking Blue version, or the Bananarama one, but the Alvin and the Chipmunks version. This kind of fun and surprising energy encapsulates Duker’s set, as she moves from West African aunties, to Stacey Dooley, to Tinder, linking it all with hilarious ease.

Duker isn’t one to shy away from difficult issues, calling herself a ‘triple threat minority’, being black, female and pansexual. Throughout the show, she embraces these elements of herself, talking about the difficulties of growing up without many black female role models in pop culture, and celebrating the role her ‘aunties’ played in her youth. She also talks about her route to being open about her sexuality - especially with her family. Through all of these topics (and more), Duker weaves in hilarity and silliness, keeping the audience with her the whole way through. She also uses her charm and talent to question and prod at why we don’t talk more frankly about certain taboo topics, playing with the audience’s discomfort and turning that into laughter. Most crucially, there’s always a sense that her jokes come from a place of love, whether she’s ribbing the aforementioned ‘aunties’ or Kate Middleton, none of her jokes ever feel callous.

Another thing that works is how much Venus is a multimedia experience. Often the site of her fun and ridiculous tangents, Duker used perfectly timed video and images to boost her jokes, but never using them as a crutch. This multimedia also enabled one of the best Tinder jokes I’ve ever seen - taking a new angle on an overdone topic.

From start to finish, Sophie Duker: Venus is a hilarious show that touches on difficult topics with genuine warmth and charm. 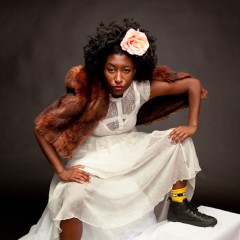