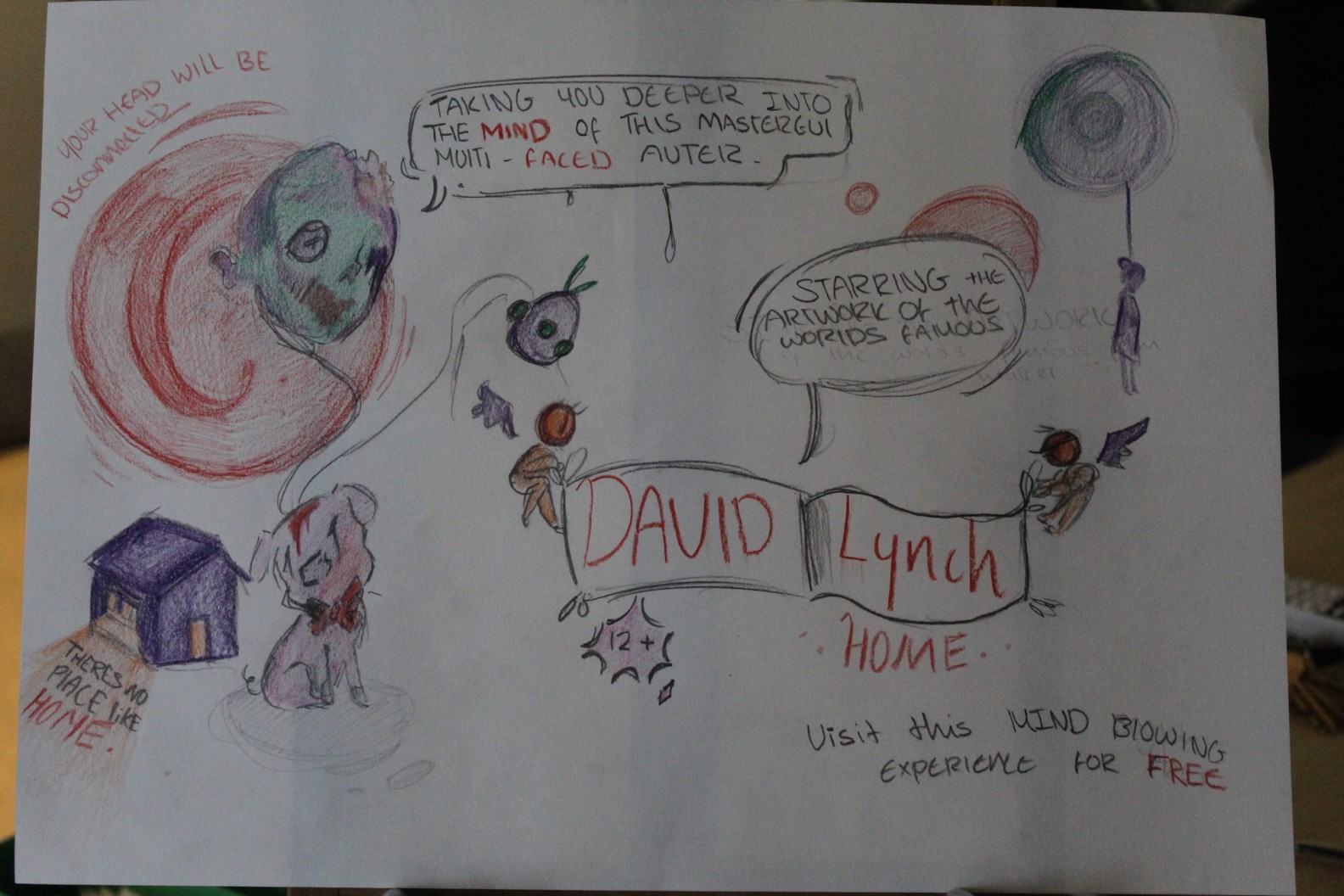 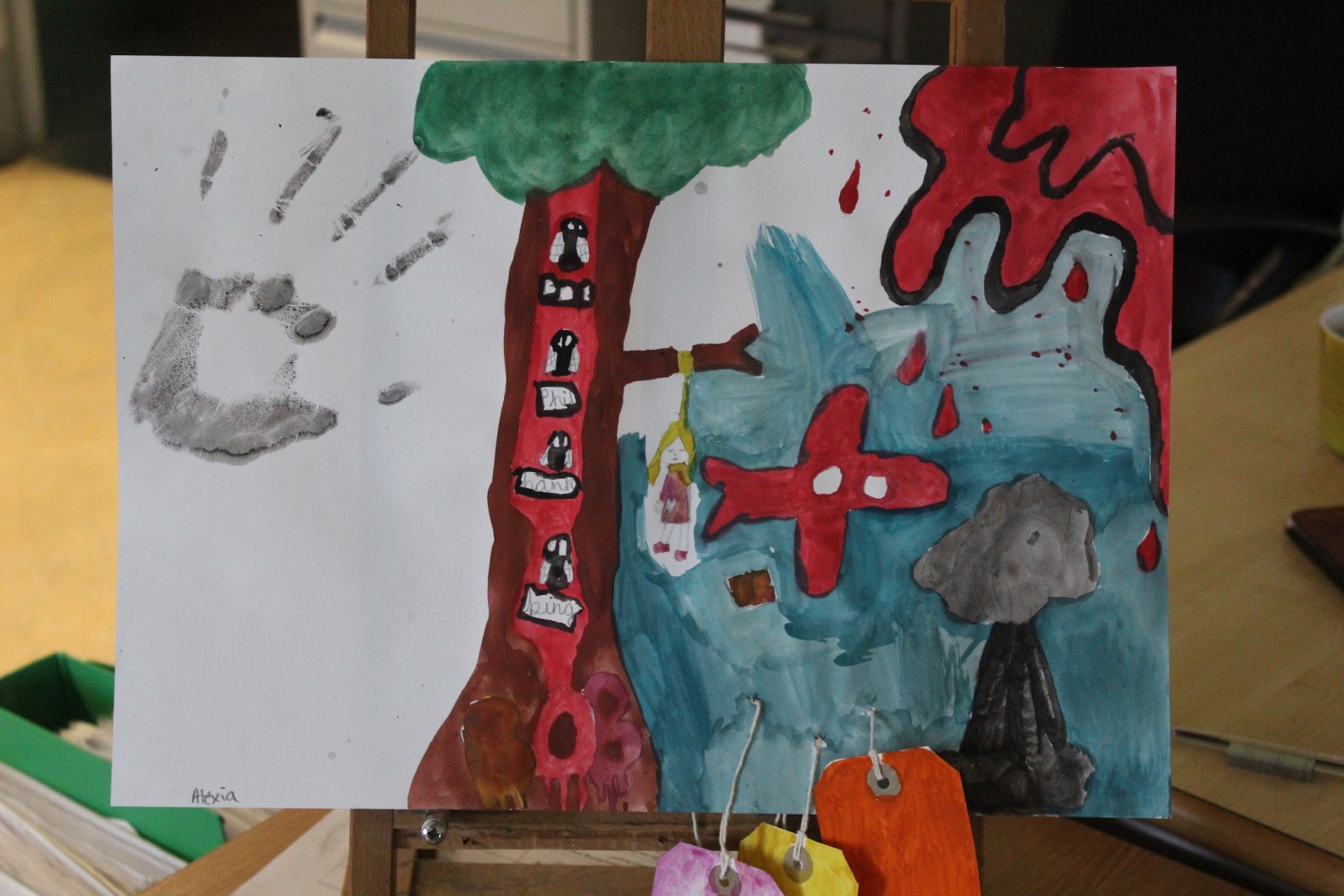 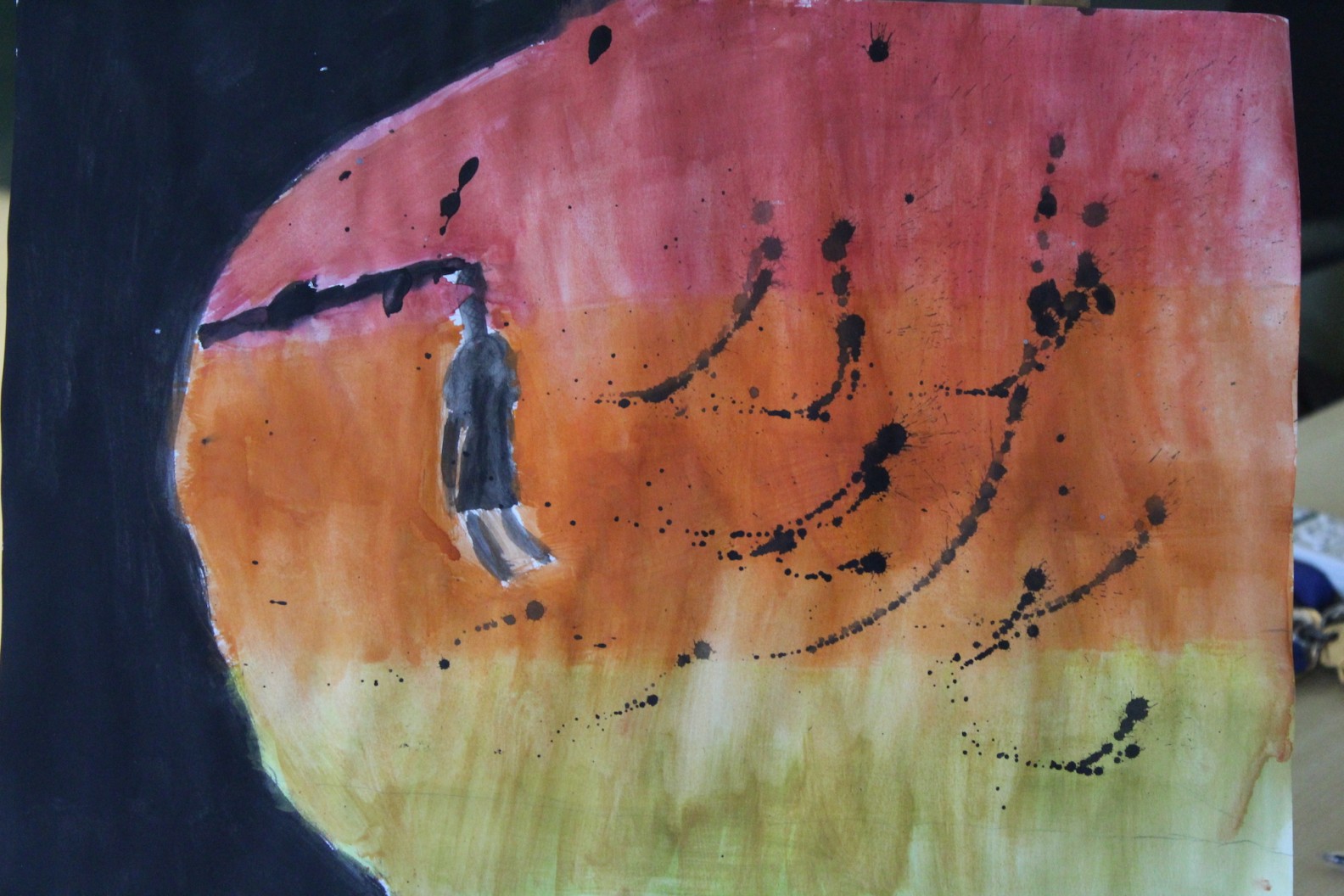 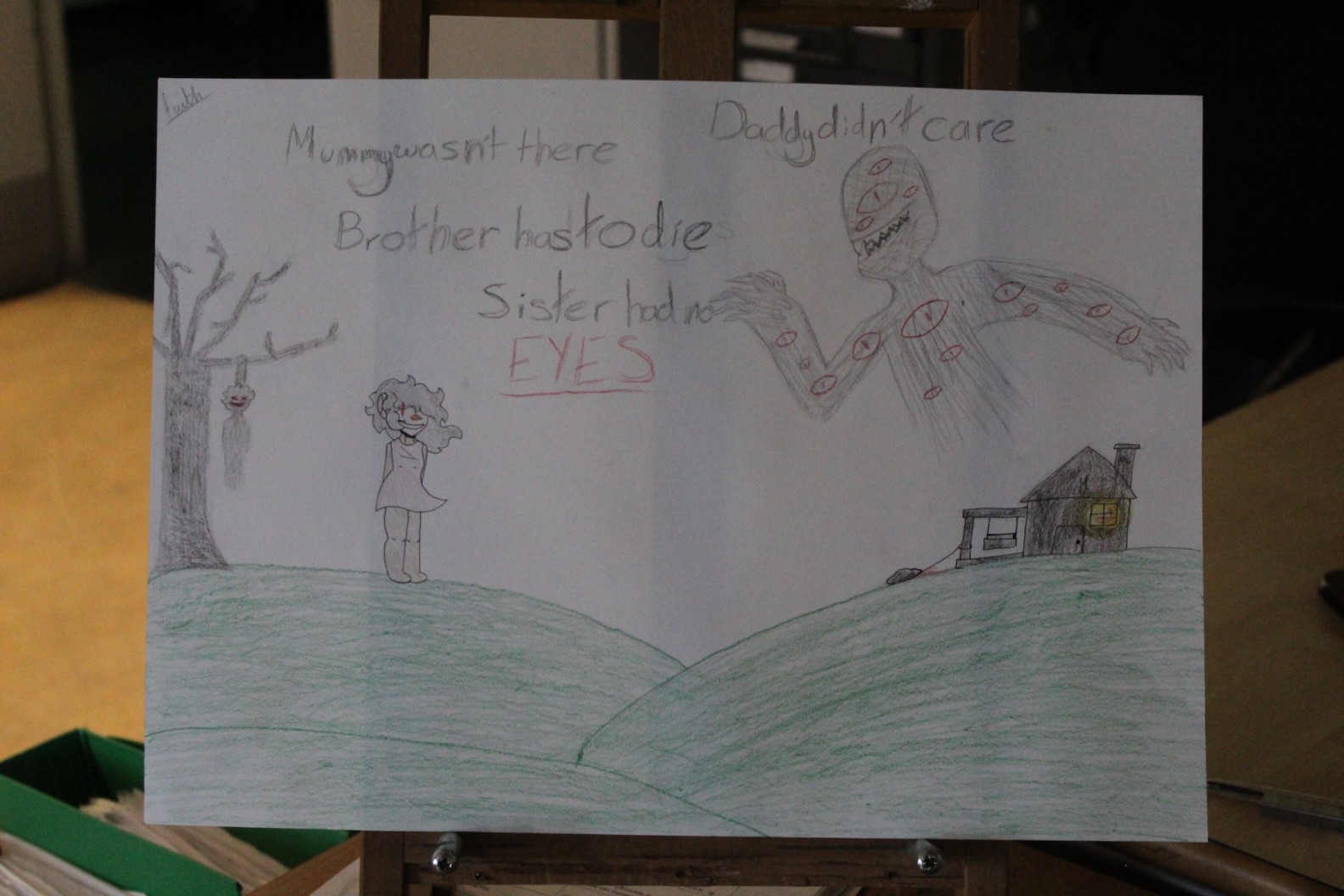 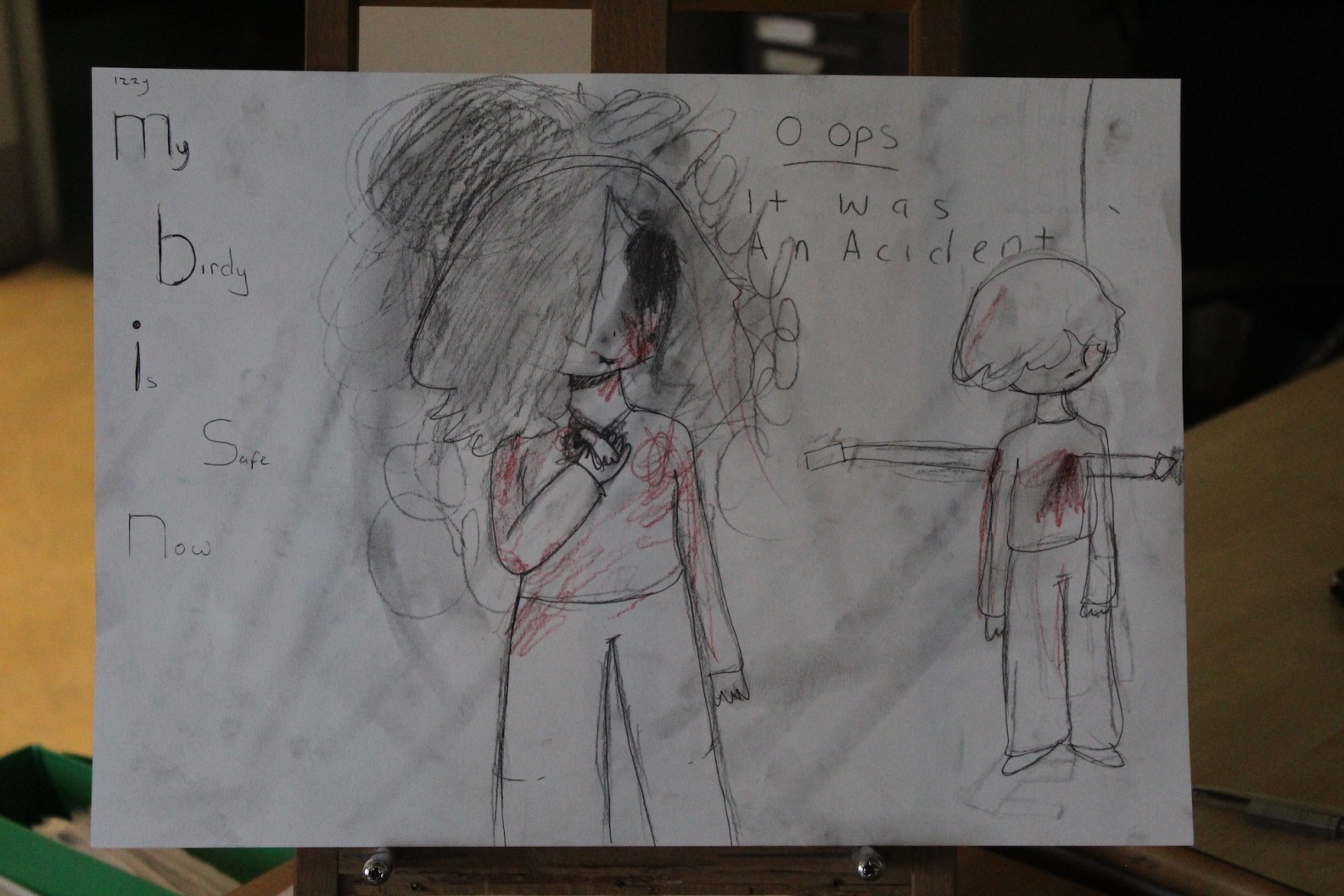 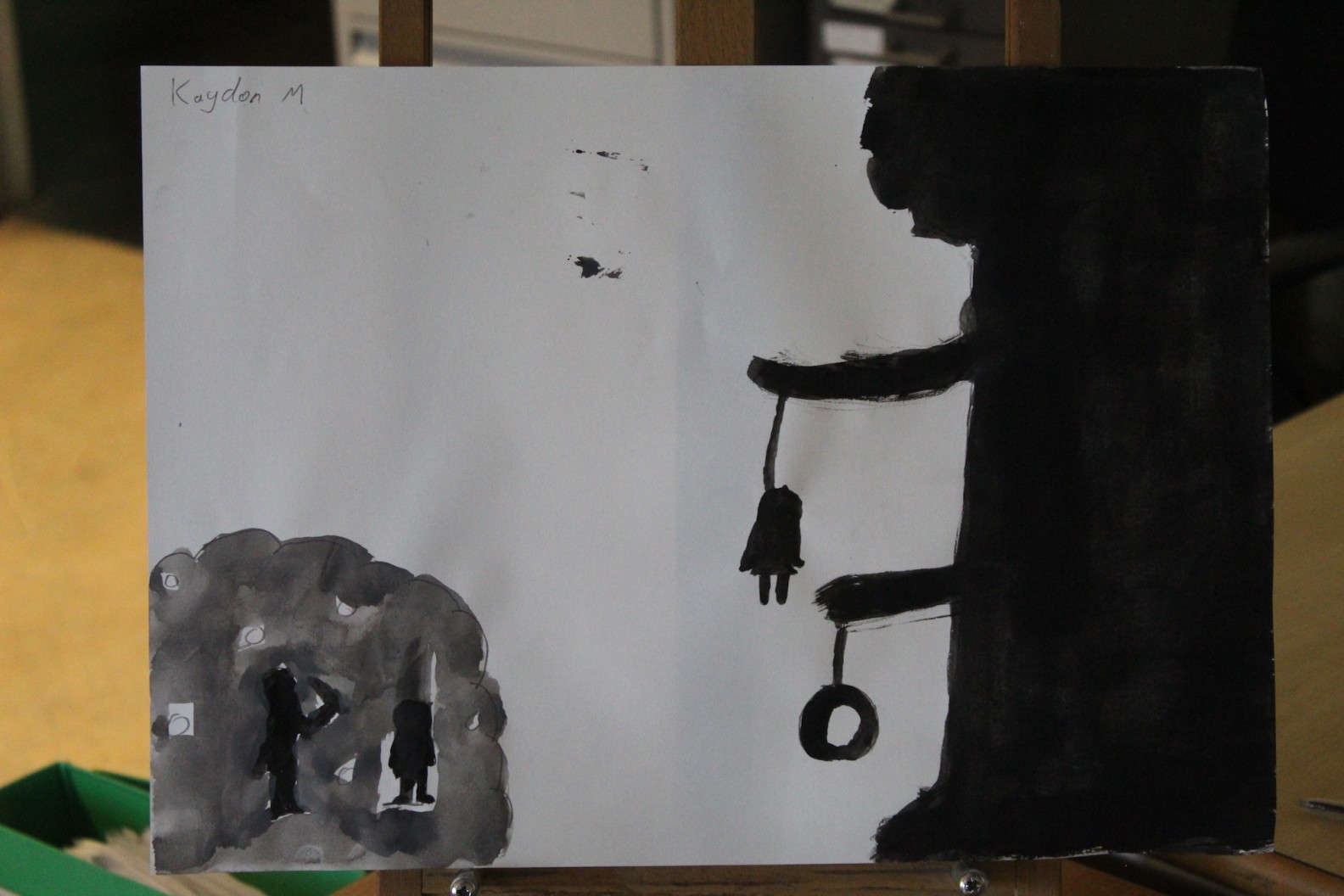 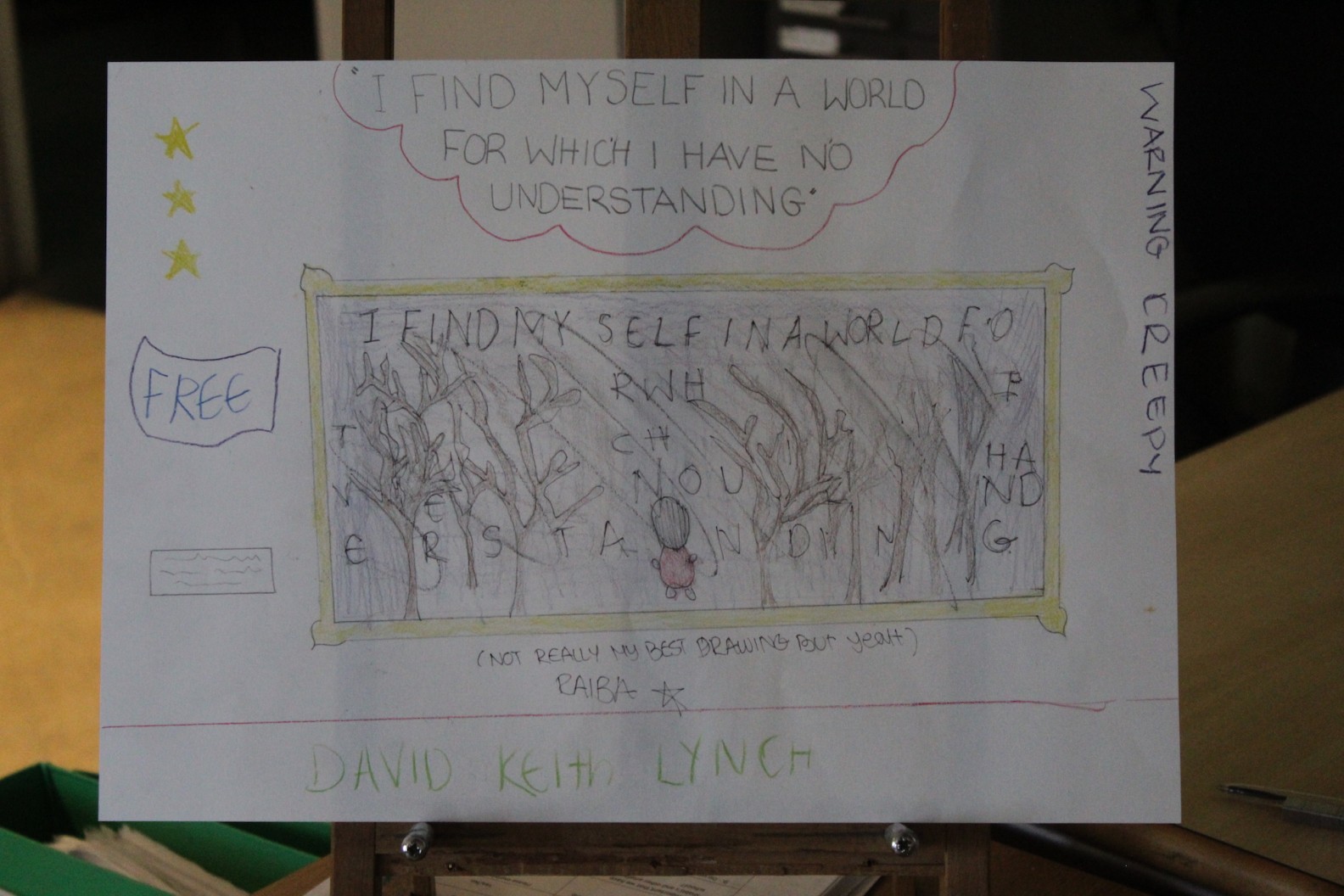 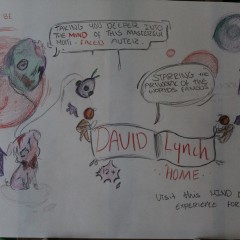 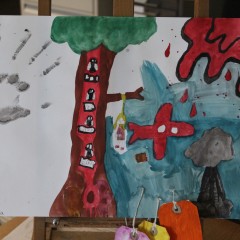 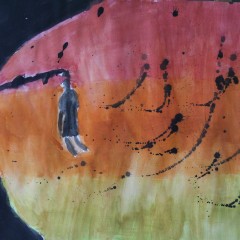 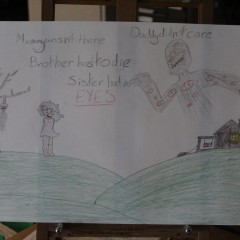 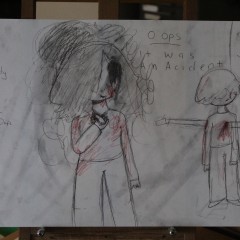 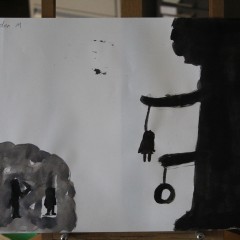 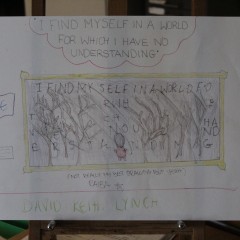 The world famous filmmaker David Lynch is exhibiting at Home. I thought the name ‘My head is disconnected’ is a good name.

I found out information about him before we looked at the work.

I thought the work wasn’t scary but I wouldn’t recommend this to students under 13yrs old as there are some inappropriate pictures and swearing but that’s my opinion.

The work is really good and personal to David Lynch. Some of the materials he used were really unusual.

In three words I would describe this piece as : Autobiographical, edgy and messy.

There is more than just an illustration on the wall.

You can see whatever you want to see such as different images and shapes inside in every single picture.

Along with the images on the wall there is a strange, attractive and unusual lamps placed in one place in the middle of the floor and each one of them got name.

I think they placed those interesting lamps there to make the audience to visit the Gallery on David Lynch and to make it more than just a normal Gallery.

My favourite illustration from all of the others is called “House of Electricity”. I think this is the best name to describe the image because the image shows a lot of people and electricity symbols inside a big house and at the top of the house there was a big, white and strange circle and next to it there was a text saying “moon” firstly I thought it’s a bulb because it relates to the name of the image but however I really liked the picture and I think its awesome.

I would describe the trip in three words: Exciting, unusual and interesting.

I think the colour of the walls is perfect because it makes a contrast between the images and the background so that makes it better for the people.

The fact that its free it made me think that its going to be boring and not exciting but it was actually interesting and cool.

Some of the pictures were confusing and so attracted more the people’s attention.

The atmosphere was alright and it made me feel like I am in a Gallery.

I will recommend it for my friends and my parents.

I will rate this Gallery on David Lynch 4 out 5 stars.

I went to see the gallery full of the work of David Lynch called “My head is disconnected” It was a strange name but it made you want to know why it’s called that.

The room was full of eerie artwork and some were inappropriate but they absorbed and drew you in.

I thought it was really interesting and nice.

One painting in particular caught my eye it was vibrant with lights and had lots of things all over. The atmosphere was mysterious and the lights were dim so the room linked to the artwork. Some artwork was disturbing and depressing e.g. one was a girl who hung herself. The artwork made you want the know the story behind. The entry is free and there’s lots of room so you’re not stuck in one place there’s also various things to look at.

I would recommend the exhibition to people  but I would say just over to 13+.

The picture in the art gallery on David Lynch was (a famous film maker and artist) named “My Head is Disconnected” stands out to me due to the fact that it is one of the many pictures in the room that you can tell that it was made when he was of a younger age like 16 because comparing it to other pictures it wasn’t as neatly presented. The entire art gallery was filled with at least 20 to 25 pieces of art work made by David Lynch, he had made more than 3000 pieces of art work they were all made creatively and all made at different times throughout his lifetime, some being when he started his art career and some made when he was more skilled and became famous in different countries like the UK and he has been doing it since he was poor and in terrible situations when he was younger.

All the pictures were ranged differently, but there were no age restrictions even though some of the pictures has bad language and other things not suitable for a younger audience. There should probably be an age restriction of 13+ but due to it being very well presented along with this language it probably should have no age restriction because the artwork is supposed to be presented to every one as the artist chooses to present it. The presentation in the room is very strict to one colour whereas it could be improved by adding a range of colours to the mix to make it more colourful. The all green colour could be good in some regards because if the artwork in one of the rooms is presenting a dark, dull and gloomy atmosphere then the dark green or maybe also a mix of black then it could be perfectly representing the dark and gloomy theme along with the art made to represent a dark theme.

My favourite picture inside the gallery of David was probably the one named “My Head is Disconnected” Due to the fact that it’s one of the only pictures that includes words to show what the picture really means and represents to the public. The least favourite picture in my opinion is the lamps presented in the middle of the room only really due to the fact that the only thing representing nothing and it doesn’t really look to me as if it really is trying to say anything or mean anything.

A true story of a disconnected head,

Beautiful stories lay on walls, words with a curtain of truth lay with

A world where reality is combined with fiction

Make your own meaning, to begin your story

A magnificent show of the truth

A story through painting and charcoal

My opinion is a positive thing

A brilliant display it was

My head is disconnected

A head in an open world of art

A body stuck in the fear of expectations

A true story of a disconnected head

“My head is disconnected “

When we first entered HOME it seemed like a normal theatre, until we entered the gallery. There were pictures inspired by the war. People wearing a gas masks, people running into a shelter and one that looked like a solider. Maybe David Lynch had experienced war, I don’t know.

Further into the gallery there was a picture of a girl hanging from a tree and it seemed quite distressing, there was also a painting of a man with his genitals out, which could make some people feel uncomfortable.

The guide does not give a recommended age. I think the exhibition is suitable for adults only. I wouldn’t take young kids to this show, as they could get distraught with the graphic paintings and drawings.

At the gallery there were different types of art, sculptures, paintings, drawings and even flies with names!

In 3 words I would describe the exhibition as Worrying, weird and distressing.

I do not personally recommend this exhibition to visit as I don’t think it is something that you would want to go out of your way to see and experience.

Art is important but this art is distressing. 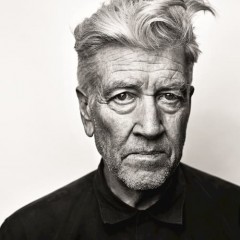