If you’re lucky enough to experience tree, then you should go. It’s a piece of theatre that inspires people, it makes you think about issues that surround our society, things that we don’t really question. It makes us revisit the past and present. This is undoubtedly the best performance I have ever seen.

Including native language and experience that touched those who performed, the entire performance was incredible. The first surprise was as I entered: the upbeat music that arose from the surroundings made me feel happy and the lights and setting were so inspirational. Once I stepped in, I felt confused - I thought I came here to watch performance, not party. As soon as I came through the door, I was greeted by Alfred Enoch. He pumped the vibe up and inspired people to dance. As the party went on, the lights were dimmed and then the performance began the hall filled up and spectators walked in.

People’s faces were mesmerised as they watched deeply. It felt like there was a bond between everyone and that there was something that played a sense of unity. Including people to dance, hold up posters and even be on stage with the actors.  They influenced people join in dances and songs. It was presented so well, as if the audience was a part of the play.  The atmosphere was friendly and no one was afraid to show their true emotions. The actors performed with such a high standard, portraying emotions which their body and creating such a traditional dance. The actors truly performed with all they could and then they used their native backgrounds that have such a big meaning and creating an influence on so many people.

My favourite scene of tree was the amount of brutality, not in the sense of the meaning only the way the actors played along with the scenes showing true emotions and showing how much pain they were feeling. The way they used their imaginations to show such a horrible scene in such a creative way. The use of physical theatre in these scene was simply phenomenal, creating the realism of a fight scene, but using unison, slow motion and extension made the performance unwatchable: I couldn’t take my eyes off what was happening and at no time was there any cringe look away moments.

The one thing that I did not enjoy was the age restriction. As I was under age, I thought that it was strange that technically I shouldn’t be here. However, Tree took me through a historic story and it has taught me a lot. I think anyone can interpret Tree in different ways.

This is undoubtedly the best production that I have seen and I am blessed and honoured to have been able to have experience it. When I first entered the room, it was filled with bright, colourful lights and loud music. At first I felt confused but also felt really excited because I had never really experienced anything like this before. As a 13 year old, I don’t have much experience of nightclubs!

I was greeted by Alfred Enoch, which was amazing because he was so welcoming and showed us his moves. As the room started to fill up, so did the energy. Nobody was shy or ashamed to dance, sing and jump around. The atmosphere was astonishing. It was infectious. I’m not known for being confident, and I’m certainly not a dancer, but I really enjoyed it and found it unbelievable.

Out of nowhere, the music stopped and a character from the play came up onto the stage and started talking. The play had started. Normally, I wouldn’t like the fact that the play had started without a warning however I found this effective because everybody was hyper and then the atmosphere turned mellow.

The rest of the play was a moving tale of tragedy and identity. Perhaps the most standout thing for me, though, was the intense level of audience participation.The idea of interactivity can often make people uncomfortable, but in this instance, I was made to feel part ofsomething.

Another thing that I enjoyed was the physical theatre. The way that their bodies moved was truly captivating. The way that they did some of the scenes in slow motion or exaggerated their movements really made the whole piece, in my opinion, even better.

This play is something that I would recommend to everybody. If you’re like me and don’t really do much out of your comfort zone, I think that the Tree performance would help you get out of your shell and give you an experience of a lifetime.

The performance was absolutely amazing - from the dancing, which perfectly complements the storytelling (and the story itself) to the special effects such as the tree which is raised from inside the amphitheatre. The metaphors of such objects create a powerful message, pushing the idea that we should stay true to our roots - another reference to a tree - and this is completely true, as it is important to be at home. The play had specific actors which were spirits: these spirits were in every scene, showing we are constantly influenced by our ancestors which guide us onto the right path. This is such a powerful meaning and again is completely true as our roots are constantly influencing our lives.

However, it also had actual experiences from South Africa inspiring the story and the events within it. It shows that even though there is a democracy there is still racism and police brutality. It involved the audience so you were involved in the performance and the beginning and end was a party which made the actors just feel so much more human and relatable. The special effects were absolutely amazing; during a raid the amphitheatre was set alight releasing smoke into the air.

Being able to speak to the actors and hear their interpretations of the piece was amazing as it allowed us to better understand and even sympathise for the characters. The dancing was amazing as it was so fluid and amazing and just made the whole experience so much better. All the actions were so natural yet exaggerated, and the emotions on the characters faces were so expressive they could tell the story without words.

This idea, created by Idris Elba and Kwame Kwei-Armah, is a must see if you have some spare money and are above the age of 14. It has been and is taking place in the Upper Campfield Market. This is truly a great piece and I recommend it.

When I first attended the ‘Tree’ production, I didn’t know what to expect. I thought that because it was called Tree, it had a deeper meaning: I thought that it would be about the way Nelson Mandela grew, from being someone no one knew to becoming the president of South Africa and fighting for his race and culture and getting equality. That is a sign of a tree - from the roots to its final form a full grown tree. Sometimes, the tree doesn’t get sun and sometimes it doesn’t get rain and those are the setbacks Nelson Mandela had, BUT he overcame them.

My favourite part of the production was when the audience were given props, including myself, and I really liked that, because it felt like I was a part of it and the props were protesting signs so it also felt like we were fighting for a point. There wasn’t anything I didn’t like because there was everything: comedy, action, horror. It was like an emotional roller coaster, at moments I was happy and at other moments I was heartbroken. Everyone felt the energy through the whole room, the dancing, the singing, the acting everything was action packed.

I would recommend this to everyone, and even though it has an age restriction, I disagree with it because everyone has their own interpretation of things, everyone gets the chance to learn. When the performance finished, the actors got a standing ovation which they well and truly deserved. The actors went out of their way to talk to us which I thought was really cool. We got to talk to Anthony Mcgen, Alfred Enoch and many of the other performers. I asked for advice on how to be a great performer. They told me that if you love drama then you should protect, feed and nutritious your interest in it because you will only get better. I loved this production and if I ever get the chance I would go again. 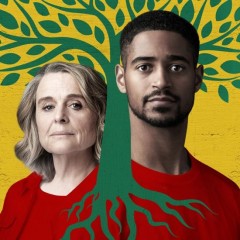