Fun, energetic and exciting, the Gals Aloud didn’t hold back!

Let me set the scene for you. A runway, decked out in black, filling a huge Spiegel tent. The audience surrounds it, excitedly waiting for the show to begin. Lights begin to sparkle against the dark backdrop, the spotlights begin to assume their position and the smoke machines billow red atmospheric puffs into the air. We’re here for fun, a nights entertainment and a hell of a show and everyone in this room knows it. You can feel the anticipation in the room, there’s like a buzz. A booming voice fills the venue, it’s the same man who announces the X Factor contestants (or Popstars: The Rivals if you will), announcing Gals Aloud. Suddenly the stage is filled with six dazzling performers, make up, costumes and moves astoundingly on point.

There is vogueing, there is drag, there is dancing. There is comedy, there is one liners, there is singing and performance. There is theatre and above all there is spectacle and visual. It’s amazing, the audience is cheering, on its feet, singing, clapping and dancing along. The whole show was so much fun and the atmosphere was immense. It felt such a great event to be a part of and you left the show feeling on a high.

The show explored the history of Girls Allowed following their introduction on Pop Idol, to their split and separate careers (or apparently lack of solo careers). Fans of Girls Aloud could enjoy the show as Girls Aloud back catalogue formed the soundtrack to the entire show, along with interviews, radio and  footage, alongside tabloid news. It meant fans could sing along, relive their youth and remember a band they once loved. But it also served as a critique for Girls Aloud, so if you didn’t like them you were still catered for, with cutting comments about their annoying habits, fake presentations, their lies, their missteps and their downfall. This show has something for everyone and even the audience members who sat stony faced and cross armed at the beginning were all up dancing by the end. In fact, from middle to finish the whole room was on its feet out of enjoyment and standing ovation.

My favourite part of the show is that the story and comedy. Rather than choosing to focus on the one band member who attained the most fame or money (Cheryl), it instead focussed on the success of Kimberley. The show celebrates Kimberley’s arc from Girls Aloud backing singer to full west end musical superstar. It applauds hard work, dedication and career instead of congratulating a sudden windfall. It highlights that Kimberley had the biggest leap from where she started to where she is now as a result of her determination and patience, and one of the best parts of the show is where it’s her moment to shine, performing an original written musical piece, singing live and it’s absolutely brilliant.

There are references to musicals throughout the show, from a Wicked, to Cats, to Annie and so many more - but it’s hearing this original song that truly wowed the audience. The song sounded as though it had come straight from a West End show, and with its mix of comedy, caricature and observation it truly hit the mark. Another highlight of the show was the performance of ‘I’ll Stand by You’, which was stunning and had the entire audience joining in and on their feet.

Bravo, I don’t like it, I loved it. You win a gold pass to the next round. See you again soon in the final. 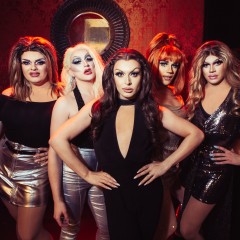 Fun, energetic and exciting, the Gals Aloud didn’t hold back!