With minimal language but maximum energy, this trio had the audience of young children in stitches

The one hour piece is centred around three wheelie bins which act as the inspiration for the series of short sketches that follow. A group from Australia, Dummies Corp have been touring the world with Trash Test Dummies for six years - and it shows. The performance drips with polish and oozes giggles from the audience who are largely under three feet tall.

All the classic tricks to ensure this little crowd erupt with laughter are deployed; throw in a handful of kicks to the bottom, accidental slaps to the face and an abundance of blown raspberries. This would have been enough to satisfy an audience of under five-year-olds. And yet, the grown-ups are also invited to share in their children’s joy as the sculpted actors expose their circus skills, effortlessly leaping from bin to bin. It’s a tiring watch.

Where this performance lacks in a fifth star is in the glaring absence of a narrative. We meet three bumbling characters who find fun in mildly injuring themselves but deep down care for each other. However, ultimately we see a string of sketches rather than a journey. The audience is left guessing as to their location or motivation, which means we build little empathy for the arc of these supposedly lovable fools.

A simple plot line to raise the stakes would have given the crowd more gumption in their responses. But regardless of this gaping hole, well-timed bottom jokes gave a guaranteed giggle.

Trash Test Dummies is a masterclass in the art of clowning and exhausting just to witness, but the performers ensured every penny of the 50 strong audiences’ ticket was worth it. It was humbling to witness a room full of children and adults alike enjoying an hour of fun without an iPad in sight. 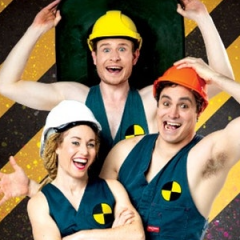 With minimal language but maximum energy, this trio had the audience of young children in stitches