Voice MagReviewsHave You Heard About…

A show about the trials and tribulations of young female actors struggling to get their big ‘break’ while comparing themselves to their fellow male peers. ‘Have You Heard About Guy?’ is a show full of light hearted humour and endearing moments of solidarity against society’s misogynistic treatment of women.

The duo made up of Hannah Robinson and Carli Fish star in this witty female comedy about the trials and tribulations of being a woman and a budding actress - in the acting world or any male dominated industry. I went into this with high expectations, despite not really knowing what to expect, and I must say that I have been thoroughly delighted.

The story starts off shortly after Jack (the daughter of two world famous movie stars) and George (the drama school girl who was on the only scholarship there) have moved in together in a small yet drastically overpriced flat in London. The pair both have agents, although of a somewhat questionable nature, yet are struggling to land any roles. Meanwhile, their cohort’s main star ‘Guy’ has landed the lead in Hamlet at The Globe, and enjoys huge amounts of industry success.

As the show progresses, jealousy becomes one of the show’s main themes and one that I found was really interestingly explored. Its presence may start fairly small, in the familial life circumstances that the two main characters find themselves, or with the fact that Jack went out for a coffee with Guy when George is harbouring feelings for him.

However, this theme grows and soon pits these two best friends, formerly fighting against the patriarchy, into rival actresses fighting against each other. Each character was well developed, with Jack sticking to her slightly picky taste in roles she auditions for, while George vehemently complains about the clichéd roles, yet still auditions for them.

Naturally, there’s going to be some conflict and tension there, especially when your best friend is landing more roles than you despite them being diminishing ‘girlfriend of…’ type parts. This pretty much continues until the pair finally see that at heart they are, very different people.

The performances from the duo were, in my opinion really captivating and so well done that I found it super easy to relate to both characters. I used to do a lot of acting while growing up and know first hand how hard it is to land roles after what may seem like infinite auditions. I also grew up with family that (knowingly or unknowingly) put a lot of pressure on me, just like Jack’s parents do. So to have both sides of my own personality portrayed through Jack and George was incredibly intriguing for me.

I might not be an actress now, but my experiences of working in the music industry and the blatant sexism and abuse that occurs behind closed doors in it, were paralleled in ‘Have You Heard About Guy?’. I was also really pleased that the show dealt with slightly more serious issues like the Harvey Weinstein scandal and so many others like it, all while remaining in line with the style and humour from the rest of the show.

If you’re around Brighton or get there before this show closes then I’d urge you to go and see this before it closes, you won’t be sorry you made the journey! 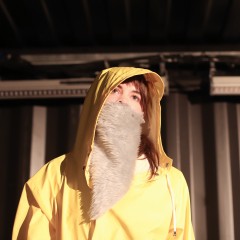 Have You Heard About Guy?

A show about the trials and tribulations of young female actors struggling to get their big ‘break’ while comparing themselves to their fellow male peers. ‘Have You Heard About Guy?’ is a show full of light hearted humour and endearing moments of solidarity against society’s misogynistic treatment of women.